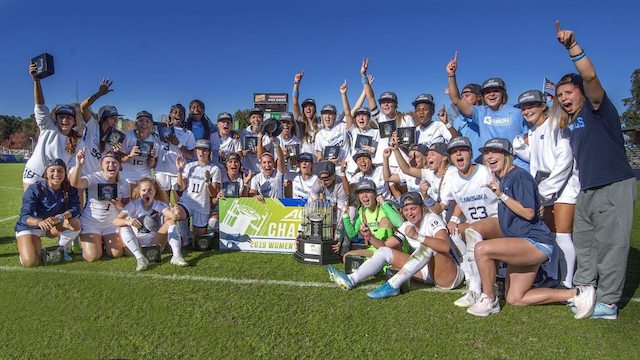 The Atlantic Coast Conference (ACC), one of the premier conferences in college soccer, is one of the few playing competitive games this fall. The opening game is on Sept. 10 with Pittsburgh taking on Appalachian State and Wake Forest facing off against Duke.

With the limited schedule, there is no meeting between North Carolina and Florida State on the regular season schedule, but we could get a matchup in the conference tournament at the end of the campaign between the two highly ranked programs.

Not all ACC programs decided to take part in the fall season, as NC State recently elected to withdraw while citing a limited roster due to injuries and inability to get in international recruits.

The other 13 programs are pushing forward, but many of the rosters will look considerably different. North Carolina has already seen a trio of players leave early for professional opportunities, and other teams are also experiencing some turnover in this uncertain time.

Offensive Player of the Year

Defensive Player of the Year

Midfielder of the Year

Freshman of the Year

Alessia Russo, Lotte Wubben-Moy, and Lois Joel all decided in August to leave the program early for opportunities back in England. Russo and Wubben-Moy were two of the key players for the team during the run to the NCAA Championship game in 2019. But North Carolina was not built around two players. The roster is still stacked and the incoming class is full of talent as well. Anson Dorrance will have plenty of options with this year’s team. Brianna Pinto, Claudia Dickey, and Maycee Bell (the 2019 ACC Freshman of the Year) are the key returners. Emily Fox tore her ACL at the end of last season, but was one of the best players in college soccer prior to her injury. Among the talented incoming freshman class, Sam Meza looks like an immediate difference-maker. Meza was part of the U.S. U20 Women’s National Team and spent a lot of time peppering Pinto with questions. She’s going to be one to watch for the Tar Heels for the future.  Talia DellaPeruta and Abby Allen should be ones to watch too.

Malia Berkely, the returning ACC Defensive Player of the Year, leads a strong returning class for the Seminoles this fall. The Florida State coaching staff will have to replace the production of Deyna Castellanos, but they can rely on Jaelin Howell, Jenna Nighswonger, Yujie Zhao, and others to help carry the load throughout the season. Florida State opens up the campaign with home games against Notre Dame and Louisville.

Virginia lost a number of key pieces from last year’s squad including Megan McCool and Zoe Morse. The Cavaliers do enjoy the return of Laurel Ivory in goal who was injured during the ACC Championship game and missed the NCAA Tournament. Ivory has been a difference-maker for the squad in the past. Diana Ordonez and Rebecca Jarrett lead the attack. Ordonez finished with 34 points last season as a freshman. If she can avoid a sophomore slump, Virginia will be a threat for the ACC Championship. UVa opens the season against Virginia Tech on Sept. 12.

It’s the Emina Ekic show. And we’re just here to watch. Ekic was a highly touted recruit when she arrived at Louisville and she lived up to the billing every season. She has started nearly every game during her previous three seasons with the Cardinals. She scored eight goals last season, and had seven goals the year before. The target for Ekic should be double digits this fall - even with a shortened schedule. She has the talent to do it, and she could put this team on her back for a magical ride in the fiercely competitive conference. Louisville opens the season at Miami on Sept. 17.

Due to a depleted roster, NC State is not playing during the fall.

After scoring nine goals in 2019, Marykate McGuire is the focal point of the Duke attack - and scored the opening goal of the inter squad scrimmage last week. She is getting some big help this season. Freshman forward Grace Watkins was handed the No. 9 jersey and fellow freshman Olivia Migli was given the No. 10 jersey. Fellow freshman Nicole Chico was among the standouts from the scrimmage. The incoming class plus the return of Sophie Jones from injury means there is a lot to be excited about with the Duke program for this fall and the foreseeable future.

Clemson’s strong recruiting class and returning freshman sesnsation Hal Hershfelt make them a team to watch this fall. The Tigers brought in a number of national ranked recruits from the 2020 class and should use that group as a building block for future success. This fall season could see a number of freshman earn meaningful minutes with the Tigers. The experience for this abbreviated slate of games could be the key for success in the spring with this squad.

Notre Dame was nearly unbeatable at home last, it on the road that was the struggle for this group. Sammi Fisher, the team’s leading scorer for 2019, is back for her senior season. Despite only starting two games in 2019, sophomore forward Kalyssa Van Zanten finished third on the team in goals scored. She could be in for a much bigger role in the offense for the fall.

Virginia Tech is making the most of this fall season with a dozen games on the schedule. The eight conference games plus non-conference games. Maximizing the most of a situation will be a big benefit to a relatively young squad - Tech is replacing goalkeeper Mandy McGlynn who played every minute last season and defender Jaylyn Thompson who played nearly every minute last season. Eight of those 12 games come against teams that made the NCAA Tournament in 2019. Nicole Kozlova led the team in scoring in 2019 with five goals and two assists.

Legendary coach Randy Waldrum enters his third season in charge of the Panthers program. Waldrum’s squad picked up a pair of wins in ACC play last season, and will be looking to build on that mark in the future as he rebuilds the culture of the program. Forward Amanda West was the leading scorer last season with 10 goals. She is going to get a lot of attention from the defense in 2020.

Miami opens the season at a neutral venue, but does not have to leave Florida until October. The lengthy homestead should come in handy as the team was competitive at home in the past. Last year’s group struggled to find a consistent threat as no one scored more than three goals on the season.

Wake Forest lost leading scorer Hulda Arnarsdottir from last year’s squad, which opens up a considerable hole in the attack. Arnarsdottir scored eight goals last season for Wake. The squad will be looking at Ryanne Brown and some of the newcomers to step up.

Meghan Root had a strong end to the season last year with three goals and an assist in her last five games. The Cuse is hoping that continues into 2020, as the squad needs a consistent threat in the attack. Goalkeeper Lysianne Proulx played every minute in goal during the 2019 season. She is back for her senior season after leading the ACC in saves in 2019.

Jason Lowe enters his second season in charge of the Eagles. Lowe will be counting on sophomore Sam Smith after she scored eight goals in her freshman season. Boston College doesn’t start the season until Oct. 1.