With his coaching duties with the U.S. U23 Men’s National Team over, Akron coach Caleb Porter is returning to a different looking Mid-American Conference.

West Virginia has joined the ranks of the MAC this offseason, a move triggered by the football team’s decision to move from the Big East to the Big 12. 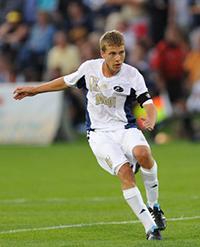 Added West Virginia head coach Marlon LeBlanc: “I think our addition to the league makes it a much better league but also hopefully builds a new rivalry between some of these schools and West Virginia.”

Akron has been the dominant force in the MAC since Porter took over in 2006. In that span, the Zips have won six straight regular season titles, and four MAC tournament titles – although falling last year on penalty kicks to Western Michigan.

Porter, who has thrown himself into the spring season since the disappointing end to the CONCACAF Olympic qualifying campaign, is eager to head back out after returning a significant number of starters.

“We feel really good, feels a lot better than last spring when we were basically reloading our whole team,” he said. “This year we have a lot of returning guys, eight starters, and that allows us to really build the team in the way that we want them to play and we feel like we have a lot of really quality pieces returning and some really talented players joining us as well.”

The Zips opened up their spring schedule over the past weekend, having back loaded the schedule because of Porter’s absence with the U23. He was in and out of Akron the past four months with national team duty, leaving training in the hands of his assistants. Akron’s opening weekend of action was no problem, however, as they defeated Pittsburg 2-1 on Friday and followed up with another 2-1 win over Colgate on Saturday.

Among the players returning are U.S. U20 youth internationals Bryan Gallego and Wil Trapp, defender Chad Barson, midfielder Scott Caldwell and goalkeeper David Meves. Despite his team’s shortcomings last fall, defeated in the round of 16 by tournament finalists Charlotte, Porter felt like the team coped well after losing seven starters from the 2010 championship team.

“We feel like last year we did well to keep the program at a high level, our goal always following the championship with losing so many guys was to stay in contention to win a national championship, and I think we did that,” he said.

Of course, Akron did lose a big piece of last year’s team in forward Darren Mattocks. The dynamic Jamaican attacker, who signed a Generation adidas deal and was drafted by the Vancouver Whitecaps, scored 21 goals and won’t be easy to replace.

However, Akron’s recruiting class is as strong as ever, and features U.S. U17 World Cup veteran Alfred Koroma. Possessing blazing speed, he’s hoping to follow in the long line of former Akron forwards.

“We’re expecting big things from Alfred,” Porter said. “I think he’s one of the top strikers in the country. Like all young players he has things to learn, just like [Steve] Zakuani, Teal [Bunbury], Darren and Darlington [Nagbe], they were not the finished product but we knew they were going to be very special players, they were going to be extremely talented.”

But the stacked recruiting class – rated No. 1 overall – features way more than just Koroma. Along with U17 goalkeeper and Houston Dynamo Academy product Fernando Pina, the Zips are also set to get Colorado’s Dillon Serna, an attacking midfielder, the transfer of SMU’s Robbie Derschang, and Omari Morris from Toronto FC’s Academy.

In Morris, who turned down a pro contract from Toronto to attend Akron, Porter hopes to bring in a player who can add an attacking edge from the flanks, something he felt was missing in 2011.

“We looked at last year and felt like we felt short in our width and penetration in wide spots,” he said. “We really didn’t have dynamic players that could open the game up other than Darren, and he was pretty much the guy that carried us in terms of stretching teams, penetrating and scoring goals, but we really needed more than just him.

“We fell short in a few games where teams sat on us and kind of clogged up the middle, looked to take the space away behind, double down on Darren, and we struggled in those games.”

After joining the MAC, West Virginia now becomes one of the other teams, alongside Western Michigan, Northern Illinois, Buffalo, hoping to chase down the Akron juggernaut.

But the Mountaineers, who boast a pretty talented roster by their own right, are battered by injuries in the spring. Shadow Sebele and Peabo Doue, two of their dynamic attackers in the fall, are both sidelined by offseason surgery, while Andy Bevin, last fall’s Big East Rookie of the Year, has missed significant chunks because of Olympic qualifying.

That hasn’t deterred LeBlanc, however, from trying to push and experiment at least a little bit.

“We’re just tinkering with our formation a little bit, seeing where we could be a little bit better, particularly defensively and in the midfield,” he explained. “It’s kind of hard to do when you don’t have all the components.”

Outside of West Virginia, Northern Illinois has a decent shot at trying to dethrone Akron. After the Zips lost in the semifinals of the MAC tournament on penalty kicks, NIU went on to win the MAC tournament, losing in the second round of the NCAA Tournament.

Freshman Isaac Kannah, who logged significant minutes last fall, returns and will need to step his game up as the other programs aim to chase down Porter’s Zips – as will the rest of the conference.

Travis Pittman, West Virginia, midfielder: “My hopes for him is that he really emerges as a dominant force, not just from a league perspective, hopefully he gets some recognition from a national perspective,” LeBlanc said of Pittman, a product of D.C. United’s Academy. A defensive midfielder with the ability to stamp his authority on a game, his performance as a senior will play a massive role in West Virginia’s MAC success.

Isaac Kannah, Northern Illinois, midfielder: NIU’s offense wasn’t an overwhelming force in 2011, but as a freshman, Kannah did his best to move things along, scoring twice and leading the team with six assists. His ability to grow and improve as a sophomore

Wil Trapp, Akron, midfielder: A highly rated holding midfielder from the Crew’s Academy, Trapp started all 23 games as a freshman and needs to assert himself even more in his second year to help the Zips reach the heights of 2010.