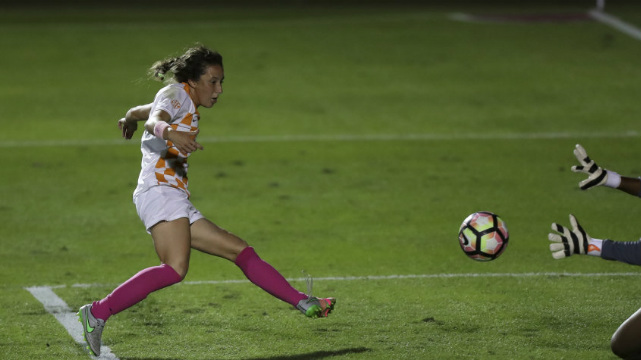 Back in her senior year of high school, Carlyn Baldwin almost didn’t end up at the University of Tennessee.

The U.S. youth national team midfielder was weighing the opportunity to turn pro and join French club Lyon in lieu of playing college soccer back in 2014. In the end, Baldwin joined the Volunteers, where she’s anchored the SEC side’s midfield the past three seasons.

Fast forward three years later, and Baldwin is taking that step to the pro level – albeit a year early. The Virginia native recently signed a contract with BSC Young Boys in Switzerland, deciding to forego her senior season at Tennessee.

“After my junior season I really wanted to take that next step of being a full-time player, really focusing on my development,” Baldwin said.

Once she made up her mind, Baldwin started to search for options at the pro level. Through a connection with her coaches back at her club team in Virginia, she traveled to Japan, visiting and training with JEF United in Chiba.

She spent a little more than a week with JEF United, training with the first team and taking part in a scrimmage. From there, she returned home, mining another connection that led her to BSC Young Boys.

One of the coaches from Baldwin’s trial with Lyon – Marisa Wunderlin – had moved to take over the head coach role at the Swiss club in Bern. Baldwin and Wunderlin had remained in touch throughout her time at Tennessee, and the coach invited her back over to train.

The two experiences gave Baldwin all that she needed to make a decision.

“It’s really cool to see how each country approaches the game differently,” she said. “Every club does, every coach does, going over to Japan, I got to experience how they approach each training session, in Europe, same with that. I had been in France so I knew the European style a bit, and I knew [Marisa] and how she approached her training sessions.

“I think for a soccer education, getting to see so many different styles in so many different countries, that’s been huge for me and it allowed me to make a really informed decision where I wanted to go play.”

Baldwin, who has spent time with various U.S. youth national teams, is a technical central midfielder with a good passing range and a high soccer IQ. Looking to start her pro career abroad made sense on a number of levels, including how it fit her as a player.

A big part of the pull toward Young Boys was Wunderlin’s desire to help her players improve and maximize their potential.

“In Europe, the two most competitive [women’s] leagues are probably France and Germany,” Baldwin said. “But Sweden, Switzerland all have really, really good leagues with great teams. Talking with the coach, she wants to see her players take that next step possibly playing in Germany and France. She wants me on that track to keep climbing that ladder, and that really excited me and drew me to her because I felt like she was going to invest time into my development as a player. Having this first opportunity playing at a top division in Europe, and a coach that wants to see me progress to an even higher level, that led me to my decision.”

That track leaves Baldwin with a year and a half left of coursework to get her college degree. That’s something she’s planning on working towards in the offseason as part of her career goals.

“That is important because for me I see myself being involved in the game for the rest of my life,” she said. “In order to coach at a high level you do have to have a degree so that’s important as well."

Moving to the Swiss capital is next on her list, however. Baldwin leaves the United States on Friday, traveling to Cyprus to meet up with her new team that’s in the middle of its preparation to resume the season after a winter break.

From there, she takes the step up, aiming to become the best player she can possibly be.