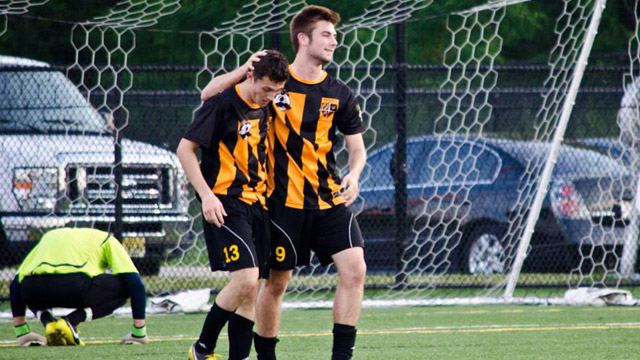 TAMPA, Fla. – The PDL announced its Team of the Week for the final week of the regular season, with Baltimore Bohemians forward Pete Caringi being honored as the Player of the Week. Caringi, who is about to begin his senior season at UMBC, earned his second Player of the Week award this season after recording four goals in two games to lead the Bohemians into the playoffs for the first time.

With Baltimore needing a pair of victories in their final two games for a chance to make the playoffs, Caringi scored twice in their Wednesday night game against the NJ LUSO Rangers as the Bohs took a 5-1 victory. Caringi shone brightest on the final day of the regular season , however, as he led his team back from a two-goal deficit against the Mid Atlantic Division champion Ocean City Nor’easters. Caringi scored in the 78th and 88th minute to tie the game before goalkeeper Zach Kane scored the game-winner for the Bohs in stoppage time, giving the club second place in the division and its first playoff place.

Caringi is joined in the Team of the Week attack by Chris Prince of the Chicago Fire PDL, who had a pair of goals in his side’s 4-2 victory against Michigan that helped propel the Fire into a playoff position. The Southern California Seahorses’ Antti Arvola completes the trio after a four-goal game in his side’s victory against the OC Blues Strikers.

The Thunder Bay Chill’s Sergio Campano led the midfield quartet after recording a hat trick in the Chill’s season-ending victory against WSA Winnipeg. The win allowed the Chill to claim the PDL regular-season championship for the first time. Joining him was fellow hat trick scorer Lebogang Pila of the Jersey Express, Laredo’s Greg Mulamba, whose goal clinched the Heat a place in the playoffs, and Virginia Beach’s Devin Pierce, who had a strong performance as the Piranhas defeated the Carolina Dynamo to claim their playoff place.

Ottawa’s Nikolas Jelicic leads the defensive group after he had a goal and helped the Fury record their ninth consecutive shutout in a win against the GPS Portland Phoenix. He is joined by Ocala’s Sam Duininck, who had a strong performance in the Stampede’s regular season-ending victory against VSI Tampa Bay, and Ventura County’s Dylan Riley, who helped the Fusion clinch a playoff place with a 0-0 draw against the LA Misioneros. Rounding out the side is goalkeeper Michael Petersen of BYU, who had a seven save shutout to help the Cougars close out the season with a 1-0 win against FC Tucson.