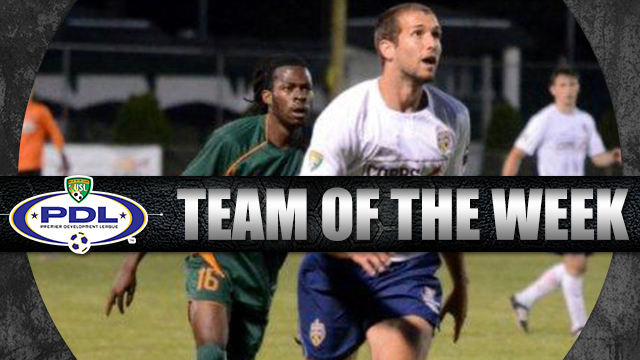 TAMPA, Fla. – The PDL announced its Team of the Week for the seventh week of the season today, with Michigan Bucks forward Gerald Ben being honored as the Player of the Week. Ben, pictured left, scored both goals as the Bucks took a 2-0 victory on the road against FC London this past Friday, moving into first place in the Great Lakes Division in the process.

London entered Saturday’s game with a perfect five wins from five to start the season. It held the upper hand in the first half, but was unable to take the lead before the break. Ben’s introduction in the 57th minute proved pivotal, with the forward giving his side the lead after just two minutes as he put away a chance created by Stewart Givens. Ben then doubled the Bucks’ lead with 20 minutes to go, giving the Bucks victory and some revenge for their elimination by London in the 2012 PDL Playoffs.

Ben was joined in the Team of the Week attack by the Ottawa’s Carl Haworth, who had a hat trick in the Fury’s 4-1 win against the Real Boston Rams on Saturday night. Rounding out the trio is Austin’s Andres Cuero, who had two goals and an assist as the Aztex remained perfect with victory against El Paso on Saturday night.

Another player who helped his side maintain its perfect record was also honored, with Thunder Bay’s Sergio Campagna leading the midfield selections after he had a goal and an assist in Saturday night’s 2-0 win against the Des Moines Menace. Also selected were Baltimore’s Michael Gamble, who had two goals and an assist in the Bohemian’s victory against Westchester, Kitsap’s Neil Schaffer, who had both goals in the Pumas’ 2-2 draw with Portland, and Reading’s Fatai Alashe, who keyed United’s comeback to earn a 1-1 draw with Ocean City.

The LA Misioneros’ Angel De Alba led the defensive selections after leading his side to a 3-0 win against the Ventura County Fusion on Saturdaynight. He was joined by Laredo’s Felipe Souza, who scored twice in the Heat’s 3-1 win against El Paso on Friday, and Springfield’s Rhys Cairns, who played a key role in back-to-back shutouts for the Demize against Winnipeg. Toronto Lynx goalkeeper Triston Henry was also honored after recording a pair of shutouts in his side’s games on the road against the Chicago Fire PDL and Chicago Inferno.