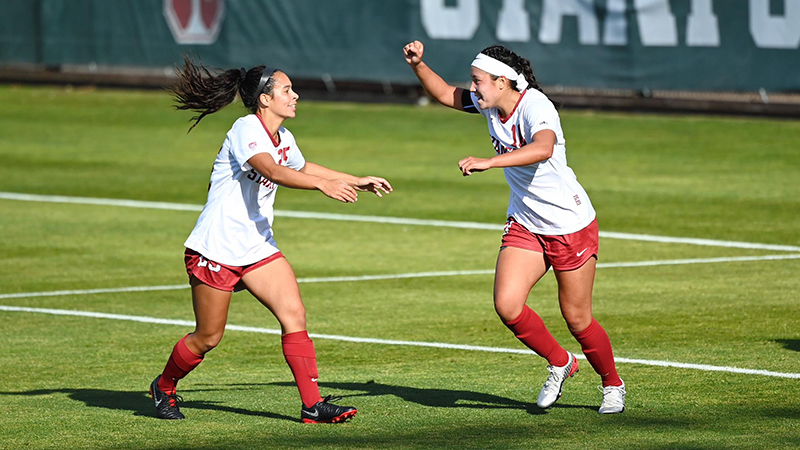 With the college weekend only a couple of weeks old, it’s very much small sample size territory when evaluating teams and players.

Here’s a look at some of the top performers from the games in August in both men’s and women’s DI soccer.

Payton Linnehan, Penn State – It’s been a monster trio of games from Linnehan so far, as she looks capable of a breakout junior season. Five goals and two assists are a very good start, including a hat trick in a 4-0 win over La Salle. She’s managed to get on the end of chances, finishing five of 10 scoring opportunities, while also fashioning them herself – she’s created eight chances in that stretch. It’s worth monitoring that she’s overperforming her Expected Goals (xG) mark at this point, with her five coming off just 1.93 xG.

Maya Doms, Stanford – Based off the InStat Index, Stanford tops the charts in women’s DI soccer through three games with a trio of strong attacking performances. She’s been both a scorer (four goals) and created nine chances. Boosting her efficiency numbers will be a key part of maintaining her success, as she finished just 24% of her chances. Because Stanford has the most chances created in women’s soccer (18) so far, it hasn’t mattered. But being clinical is something she’ll need to do as the season progresses.

Rebecca Jarrett, Virginia – This Virginia side has a chance to be one of the top offenses in the country, and they lived up to that billing through four games. Jarrett’s form has her at the top of the Index for the Cavaliers, tied with a few other players in goals scored (3), and created the second-most chances on the team (6). The dynamic wide attacker is also boosted by the number of dribbles she attempted so far (31), with a success rate of 77%.

Zsani Kajan, St. John's – A clinical start from the Hungarian forward has boosted her towards the top of the Index. She has seven goals in three games, outperforming a 3.8 xG. She has been clinical, converting 67% of her chances at this early stage of the season. It's nothing new, as Kajan has been a strong goal-scorer ever since arriving at the Big East.

Luke Hille, NC State – Arguably the top recruit from the class of 2021 in North Carolina, Hille backed that up in the first two games of the season. He scored three goals in the opening weekend. Of course, it’s worth noting that NC State opened versus UNC Asheville and USC Upstate. That being said, it’s a brilliant performance from Hille in his first two competitive games in college soccer. He finished three of his four chances, and per the InStat numbers has those three goals on 1.92 xG. Passing numbers are solid too (81% of 69 attempts completed), and he’s flashed chance-creation chops (2).

Simon Becher, Saint Louis – It was a strong opening weekend for Saint Louis, with wins against Louisville and Creighton. Becher tallied the winning goal versus the ACC side, scoring a brilliant header, his second of the game. It was two goals from four chances, a solid start for the Atlantic 10 standout. Two goals from a 1.11 xG isn’t too shabby either. Of note, and as an attacking player it’s not a number to hold against him, he did lose the ball 26 times in the first two games, including twice against Louisville. Improving and excelling as a holdup player would certainly boost his pro prospects along with SLU’s chance of competing for an A10 crown.

Dylan Teves, Washington – A goal and assist in UW’s opening match against UC Davis propels Teves in the InStat Index. Along with that, he created two chances in each of Washington’s first two games, notching an assist against Cal State Fullerton. Keeping Teves and his attacking production on the field is a critical challenge for the Huskies as they eye another strong performance this season.