One of the more far-flung conferences in the country, with programs sitting out west, the Big Sky is certain to be a tightly contested set of teams. Few things are certain as teams prepare to kick off another campaign.

If there’s one thing for sure, however, this fall is going to be hard to predict.

“I think the interesting thing with our league is it changes year to year,” Northern Colorado head coach Tim Barrera told TopDrawerSoccer.com. “You could have teams that win it one year and they finished sixth, seventh last year.”

Another big obstacle sitting in front of teams in the Big Sky is the travel distances, as it’s not close to hop from Portland, to North Dakota, to Utah, and schools in between. That said, the far-flung locales of each programs mean that October and November games could spell doom for those traveling.

Most coaches indicate that the travel and surface differences makes this conference favorable to the home side, and that is certainly going to factor in as another Big Sky season begins soon enough. 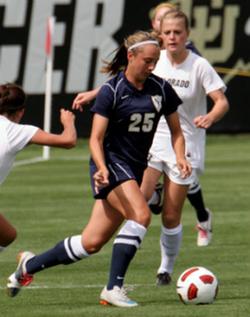 The regular season co-champions lost a significant amount of its core to graduation, and that’s going to be the biggest challenge ahead of this group in erasing last year’s disappointing conference result.

Tim Barrera has helped put together a solid last couple of seasons, and the concern this year is trying to replace a strong quartet of departed players.

“We graduated four kids in the middle of the field, Barrera said. “The big thing for us is transitioning more players into the mix.”

All four of those players were in critical spots in the field, including the team’s starting goalkeeper and the league Defensive MVP.

Naturally, Barrera does have confidence in the returning players he thinks capable of stepping up and continuing to excel, such as forward Juliana Grover, midfielder Tara Rickenbach and midfielder Danielle Birdsall.

An experience observer of the Big Sky, Barrera knows that it’s going to be another unpredictable year, and that he won’t know what to expect until hitting the conference schedule.

“You never can really tell when you look at pre-conference schedules and how they do, how they’re going to do,” he said. “We try to play a fairly balanced schedule, play some tough teams, but also play some teams that are a little more in the style of the Big Sky.”

With an incoming freshmen class of 10 players, there will be a lot of new faces on Portland State.

However, a lot of the stars from last year are still in place, including Conference Offense MVP Megan Martin, who scored six goals and added two assists in 2011.

Melissa Trammell and Amanda Dutra are also going to be seniors alongside Martin, and together the trio will look to offer up the requisite offensive production needed to push the Vikings into contention.

Facing a high rate of turnover, Weber State has 14 new players entering the program heading into this season.

And how much they have to offer is going to dictate this program’s success, although there are pieces already in place, like the Big Sky Newcomer of the Year from last year Mackenzie Day.

Also providing the experience alongside day is another sophomore, midfielder Kendra Bailey and junior defender Bailey Eames. Improvement may not be out of reach, but members of the incoming class will have a strong influence on how the regular season pans out.

Despite a rocky regular season, and a mid-table finish in conference, Montana managed to get hot at the right time to capture the conference tournament and book a game in the NCAA tournament where they lost against Stanford.

All but one player returns from last year’s conference-winning team, giving Montana a strong outlook for the upcoming season.

“It always gives you a bit more confidence that you have so many players returning, they understand what we’re trying to do and what’s expected of them,” Plakorus told TopDrawerSoccer.com.”

Added defender Lauren Costa: “We’re very excited because we have a lot of returners coming back.”

Helping the team cope with the loftier expectations is a roster full of juniors and seniors expected to see a good bit of playing time. Costa and Lauren McCreath, are the senior co-captains and will look to dominate the middle of the park.

India Watne is also coming off a great season in 2011, and Plakorus thinks that Mackenzie Akins and Taylor Rhodes can step in and contribute right away as freshmen.

However, even with the number of players back, it’s still a clean slate for the team.

“Every year we look at it like it’s a whole new season with a new team,” Plakorus said. “We’re just trying to focus on us and how quickly we can put our team together and how good we can be.”

Another program coping with a significant talent drain, Northern Arizona bid farewell to a pair of players who made First Team All Conference last year in goalkeeper Kirstin Salminen and Sam Monahan.

In all, 12 seniors graduated, and the new class of 10 incoming freshmen includes Nevada Gatorade Player of the Year Haley Wingender.

But the freshmen won’t be relied on exclusively, as starting goalkeeper Lauren Weaver is among those players coming back, same with midfielder Laura Johnson, who played mostly as a sub last year.

2011 leading scorer Victoria Ramirez is set to lead the attacking line once again for Sacramento State as they look to climb the conference standings this time around.

The team did lose some experienced talent, but Ramirez will have fellow forwards Jordan Carlberg and Jordyn Rolling back alongside her, as all three are going to be crucial in helping the Hornets improve their record this year.

Improvement is needed on both ends of the field for Idaho State in order to vault them into contention this coming season.

The good news is the team only graduated three seniors, meaning that there’s ample experience on the current roster, including last year’s co-Newcomer of the Year Amanda Ellsworth, who led the team in scoring her freshmen season.

If Rachel Strawn and Ashley Jones can step up and contribute more goals and expected starting goalkeeper Carly Hutchings-Maloney can lead an improved defense, significant improvement will be in reach.

Conceding almost twice as many goals as they scored last year spelled doom for Eastern Washington and returning senior goalkeeper Jamie Walker can only hope for an improved performance from the back line this year.

Up front, Cassie Black, who scored six goals in abbreviated time last year, could play a bigger role in the upcoming season to help the Eagles bounce back from a last place conference finish.

No only does this fall mean a new conference for Southern Utah, making a swap over from the Summit League, but there’s also a new coach in town, as Becky Hogan was hired after Brian Stock’s resignation to take the job as the head coach of the men’s team at Division II Malone.

Helping ease the conference transition is Hogan, who was hired from fellow Big Sky program Idaho State. And while this is her first head-coaching gig at the collegiate level, her in conference knowledge and familiarity with Utah (being a native of the state) in particular should be useful.

On the field, Hogan will be able to call upon senior forward Stacey Brinkman, as well as an experienced core of seniors like goalkeeper Charly Booth, midfielder Morgan Bridge and defender Rachel Krenzer.

After a middle of the pack finish in 2011 in the Great West, North Dakota is the second new entrant in the Big Sky this fall.

Along with Southern Utah, this is going to be an interesting year as they cope with a new conference and new opponents, adding an unexpected twist to the nine-team field.