Plenty has gone right through the first half of the college season for Cornell.

With eight straight wins to start the season, the Big Red is well situated ahead of the beginning of its Ivy League slate, which starts this weekend.

The stars of the team’s 8-0-0 start credit the disappointment of a year ago when discussing the hot start in 2012.

“We really felt disappointed in last year and had a bitter taste in our mouth, we felt like the last four games we probably should’ve done better, we definitely were disappointed to be left out of the tournament,” forward Daniel Haber told TopDrawerSoccer.com. “We all had a bit of anger in us, and we worked really hard during the spring and we were getting good team chemistry going throughout the spring.” 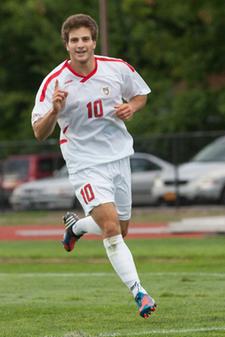 Last fall, Cornell appeared to be headed towards a first place finish in the Ivy League, winning its first three games of conference play. But in the final four conference games of the season, the Big Red came up empty, tying three and losing one game, ultimately coming up shy of the Ivy summit.

That lingering feeling of disappointment has been just one factor fueling the eight-game winning streak – not to mention the goal scoring exploits of Haber, whose 13 goals are currently best in the nation.

Head coach Jaro Zawislan goes back even further when asked about the early success.

“Our team’s record reflects the hard work and commitment of our players, not only during the last few weeks, but it’s been a process that started from 2009,” he told TopDrawerSoccer.com. “We still have players who were freshman that year, and they have been committed to improving themselves every day.”

Along with that dedication to working hard, there are familiar faces all across the field. According to Zawislan, the team that established itself as the starting group at the end of the spring semester all returned, and cemented themselves in the lineup for the fall – not because of the lack of solid recruits, but rather a credit to those returners who took care of themselves in the summer.

It was a sentiment echoed by Haber, a junior from Toronto, Canada.

“For the first time since I got here we didn’t really start from scratch, we picked up from where we left off,” he said. “I think it’s a newfound confidence and trust within the teammates and coaches, it’s just a credit to the coach, he’s done a real great job recruiting and building team chemistry.”

The early success hasn’t been due to Haber alone. Conor Goepel and Tyler Regan have chipped in offensively, while Nico Nissl and Patrick Slogic have played a significant role in the field. Defensively, goalkeeper Rick Pflasterer has only conceded five times in eight games.

Having emerged through the non conference schedule without a blemish on its record – including wins on the road at Loyola Marymount and Cal State Fullerton – the Big Red start the Ivy League schedule this weekend against Pennsylvania(m).

This is were it all counts for teams in the Ivy, as the absence of a postseason tournament means the regular season champion grabs the coveted NCAA spot. It will also be where Cornell will suerly once again recall the disappointment of last season.

“We know how things can change very quickly, especially because of our results from last year and our last three games of the Ivy League and eventually dropping out and spoiling our chances for the tournament,” Pflasterer told TopDrawerSoccer.com.

“When you go into the first Ivy League game, it doesn’t matter what you’ve done to that point,” Zawislan said. “Our record doesn’t go on the scoreboard at the beginning of the game. Whatever we will get out of the game, we’ll have to earn it, and whatever the other team has done leading into that game, whether good, bad or so-so, it doesn’t matter. Those games are the most challenging games on the schedule, but that makes it interesting and enjoyable to be a part of it.”

All it can hope for is more goals from Haber and to keep the Big Red rising all the way to the NCAA Tournament.