A possession-oriented central midfielder who has played predominately in a holding role in the Dev. Academy, Griffin Kutzner was searching for a school that combined the right school in terms of size, academics, campus community and soccer. 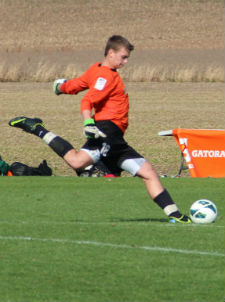 He found it in the Patriot League, and is heading to Loyola (MD) in the fall.

“On my visit to campus I had the opportunity to sit down with coach [Steve] Nichols and was very impressed with his vision to create a top program while maintaining a strong emphasis on the character of his players along with a team-first mentality,” Kutzner told TopDrawerSoccer.com. “I feel that the style of play he is implementing moving forward is one that suits me well as a player and is one that I can contribute to. Coach Nichols has surrounded himself with a great staff in coaches [Michael] Marchiano and [Matt] Dwyer and I look forward to developing under their guidance as well.”

With the rising soccer program, Kutzner also found the ideal options in the classroom.

“It offers a great liberal arts education with a lot of majors to choose from,” he said. “Most importantly, the support that academic advisor Abbie Day provides the soccer team at Loyola is second to none and is definitely something I was looking for in a program.”

Six players are committed to join Loyola (MD) this fall.

Marshall had plenty to offer Connor Openlander on and off the field, the Development Academy shot-stopper found during his recruiting search.

“Marshall had the best mix of everything I was looking for at a university, from the campus atmosphere, academics as well as the soccer program,” he told TopDrawerSoccer.com.

A ‘keeper who is fast off of my line with good ball distribution, Openlander especially liked the new soccer complex, one of many highlights of the program.

“The coaching staff impressed me with their plans and commitment for the team,” he said. “I believe coach [Bob] Gray and coach [Alex] Fatovic will help me continue to further develop my skills. Also Marshall has a history of producing very good keepers.”

The school’s tradition was another plus.

“When you arrive in Huntington everywhere you go people are wearing Kelly Green not just the students,” Openlander said. “The campus is large yet compact so that you can walk any where on campus in a few minutes.”

Two players are verbally committed to join Marshall this fall.

A versatile player for the Crew Soccer Academy, Austin Kinley can slot in as a defensive midfielder, center back or outside back.

When making the decision on which college to choose Kinley had a few factors in mind.

“Wright State plays a style of soccer that I really like and the team has great chemistry on and off the field,” Kinley told TopDrawerSoccer.com. “Coach Bryan Davis has developed a high quality squad and I can really learn from him and my future teammates. They are very competitive in the Horizon League, last season reaching the conference finals.”

Along with having the ideal major for Kinley, Wright State is also 15 minutes from home, giving his family a chance to come watch him play starting this fall.

“The school academically has what I was looking for in a major in Sports Science as I would like to pursue a physical therapy degree,” he said. “Coach Davis and the team holds itself to high academic standards which will help me in becoming successful off the field.”

Four players are verbally committed to join Wright State in the fall.