While the official release of the bracket is still a week away, TopDrawerSoccer.com’s Tournament 48 National Ranking gives a pretty good idea of who is in and who is out heading into the end of the regular season.

There are a handful of “bubble” teams that could sneak into the conversation when the committee sits down over the weekend to set the matchups for the Big Dance.

Below are five teams that fit that role and what they need to do to make it into the NCAA Tournament. 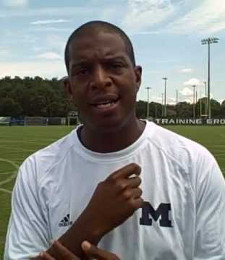 The Wolverines are comfortably in the tournament based on their RPI (and that win over Indiana last month), but they could be dropped from contention with a loss against Wisconsin on Wednesday in the Big Ten Tournament.

Michigan must have a record above .500 (which means its wins must be equal to or greater than its losses) in order to qualify as an at-large team to the tournament.  With a victory over Wisconsin in the first round of the Big Ten Tourney, Chaka Daley and his group would punch its ticket to the postseason in his first season in charge in Ann Arbor.

In theory, the Aggies are on the bubble right now. With the amount of the automatic bids from lower ranking conferences, it comes into the range of 37-42 in the RPI for some of those last spots.

Of course, the RPI is not the only factor so the committee occasional deviates from this list, but Davis makes an attractive option as an at-large from the Big West, if the Aggies fail to win their conference tournament.

The game against Cal State Fullerton on Wednesday is obviously a must-win because a loss would drop Davis out of contention (on both the RPI and the mind of the committee’s front).

After the loss to North Carolina on Tuesday in the Atlantic Coast Conference Championship, the Duke Blue Devils will need some help getting into the NCAA Tournament. The ACC program entered the week already on the bubble and did itself no favors with the result against the Tar Heels.

Duke would be the sixth team into the NCAA Tournament from the ACC, based on the RPI, which is the same amount the historically strong league snuck in last year.

The Roadrunners are likely too far off the bubble to make the NCAA Tournament without claiming the automatic bid. For a team with so much promise heading into the season, it is a harsh reality that it all comes down to the next game in Albuquerque for whether the season continues.

Bakersfield plays in the MPSF Championship Semifinal on Friday with a likely rematch against New Mexico on Sunday.

The penalty kick loss against High Point on Tuesday probably eliminated the Camels from postseason contention. Entering the week, the Big South program was already a long shot to make the Big Dance without an automatic bid.

There is still something enticing about the little train that could. Campbell has danced with the big dogs this season with games against three ACC programs (wins over NC State and Virginia Tech and a loss to North Carolina), and tough scheduling should draw some consideration.

However, it will be difficult for the committee to overlook this early exit from the conference tournament and send another Big South program to the field of 48.