The landscape is shifting in conferences all across the country, and that is true with the CAA, as VCU surprisingly bolted to the Atlantic 10 this past offseason in a basketball-driven move.

More moves are on the way, and while the coaches in the conference are waiting to see what happens, the 2012 season is nearly upon them. Here’s a look at how things stand: 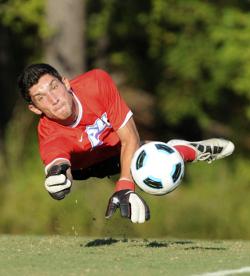 There’s a high priority for head coach Tom Martin ahead of the 2012 season.

“We have to find some people to score goals,” he told TopDrawerSoccer.com. “We lost a leading goal scorer [Patrick Innes] to graduation. It’s ironic, he was a super surprise for us because we didn’t expect that to happen.”

Returning All American Paul Wyatt will likely be expected to help close the gap after Innes’ departure, although Wyatt’s stats in 2011 were modest (6 goals, 3 assists). Christian McLaughlin might also be able to turn from supplier to finisher, as he set the table plenty for the Dukes last fall.

And although JMU has plenty of work ahead of them in the early stages of the season, it’s what Martin expects and optimism is still prevalent.

“We’ve got a nice group of upperclassmen coming back, they know the system, the competition the school, and so we’re excited in a lot of those ways,” he told TopDrawerSoccer.com. “Preseason for us, and the first part of the season, like probably most teams, it’s a time we try to answer a lot of questions.”

Possessing several quality attacking pieces, and almost returning an entire team from last year, Old Dominion has a lot to live up to this coming fall.

“With only losing one starter we have high expectations but we understand also that nothing’s given to you, particularly in our league,” head coach Alan Dawson told TopDrawerSoccer.com earlier this year. “You’ve got to work your tail off, got to be fit and I’m pretty excited and looking forward to it.”

The attacking trio of Tim Hopkinson, Yannick Smith and Gideon Asante represent a formidable force up front, combining for a total 33 goals and 19 assists last year.

Repeating that performance is obviously essential to any sort of success the Monarchs are to have this year, and it’s one of the reasons ODU has been picked to top the CAA in many corners.

The Tribe is in an unusual place this year, light on seniors and looking for goals. Leading scorer from a year ago, Nicolas Abrigo, graduated, taking with him his nine goals.

And finding the back of the net was troublesome last fall even with Abrigo on the roster, as the team managed just 19 goals in total. A good defense, buoyed by returnees Will Smith, Marcus Luster and Michael Teiman are all back with good experience under their belts, and will help compensate once again for a lack of offensive punch.

Midfield fulcrum Evans Frimpong (12 goals, 5 assists) departed from last year’s squad, but that doesn’t mean the Blue Hens will suffer a significant drop off in 2012.

Forward Roberto Gimenez can help cope with the departure of Frimpong, and Yoan Fontaine, Vincent Mediate and Kyle Nuel will offer support at the back.

However, It can’t all be Gimenez’s responsibility offensively, and he’ll need help in the attack in order to keep Delaware close to the top of the CAA heap.

A couple of important pieces graduated from last year’s successful team, but Dante Marini, the team’s best offensive weapon (7 goals, 5 assists) is only a junior and the midfielder will one again look to inspire the attack.

Throw in defender Ambry Moss and a whole host of other players at the back and it’s going to be interesting to see how the Huskies can look to get the edge in a competitive league.

Since Brett Surrency took the reins at Georgia State in 2010, the Panthers have steadily improved, and the team will aim to keep the program moving forward in 2012.

They’ll have to replace the goal-scoring prowess of Evan Scott, who graduated after a strong senior season. Stephen McGill, a goal scoring midfielder, will help to plug that gap, and if they can get more out of Caleb Kernan then it’s fair to say this team could continue to progress. First Team All-CAA Defender Chris Locandro will anchor the team at the back.

Can a team with 18 juniors and seniors on the roster harness that experience and turn into a CAA contender?

Any hopes of doing that hinges on scoring more goals, as the Dragons mustered a tame total of 14 goals in 18 games – not nearly good enough. Junior Ken Tribbett’s four tallies led the team, and other players must step up in order for Drexel to make something happen.

Scoring goals wasn’t a problem for the Patriots in 2011, as the team bagged a decent total of 37 last year. And while they lost midfielder Ryan Gracia, Taylor Morgan (9 goals, 5 assists) is a senior who will lead the line this year and midfielder Leo Stolz is coming off an impressive freshman year.

Significant improvement at the back, led by senior defender Paul Andrews, might see the Patriots emerge as a surprise this year, provided that the offense can maintain the pace of last fall.

The league’s reigning defensive player of the year, Shaun Foster, is only a junior, meaning that one of Hostra(m)’s most important pieces is back in the fold.

It’s far from a one-man team of course, and offensive maestro Chris Griebsch (4 goals, 10 assists) is also a junior, same with defender Tyler Botte. However, the Foster-led defense needs to make an improvement after conceding 32 goals last year if this team is finish closer to the top of the conference.

It’s a relatively young team at Aidan Heaney’s disposal this year, and with the team needing to replace two of its best players from last year, there is work to do for the Seahawks.

Generating offense is perhaps most paramount to an improved record in the CAA, as the team only managed 20 goals in 18 games. Thomas Driver is likely to play a big role as one of only four seniors on the roster.

Having passed the 30 year milestone in charge of Towson, head coach Frank Olszewski can only hope for an improved 2012 campaign, after a bottom of the table finish for the Tigers a year ago.

Olakunle Banjo can play a big part in that, after scoring 4 goals last year in only 12 games – he’ll need to find some consistency, and get some help in order for this side to stride forward.