The California Golden Bears lost Steve Birnbaum after 15 minutes last season when their all-everything center back went down with an injury. After a year of rehab (and petitioning NCAA for a medical redshirt), Birnbaum returned to collegiate action on Friday. 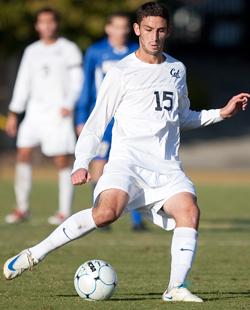 His return was a sweet sound for Golden Bears fans, as the fifth-year senior scored a goal against then-No. 3 Georgetown in the 2-0 opening win. He then scored another on Sunday in a 3-2 win over then-No. 2 Maryland.

His quality left quite the impression on the opposition.

Birnbaum’s return has made quite a difference for the Pac-12 squad.

GK: Brian Billings, Bradley: The Braves goalkeeper made seven saves on Friday in a 1-0 win over New Hampshire. He capped the weekend with another shutout, but only required a pair of stops to keep his sheet clean and start the season with two shutout victories.

D: Bryan Gallego, Akron: The Zips junior was named the Most Valuable Player of the College of Charleston Tournament after leading Akron to wins over the host team as well as Furman. Gallego and the Akron defense recorded shutouts in both games.

D: Steve Birnbaum, California: The fifth-year senior scored two goals over the weekend to help the Golden Bears top Georgetown and Maryland. Birnbaum and the defense held Georgetown to only three shots on goal in Friday’s 2-0 win.

D: Nathan Smith, UCLA: The freshman outside back set up the lone goal of the weekend for the Bruins in a 1-0 upset victory over Indiana on Sunday. He was also a key piece of the scoreless draw against Notre Dame on Friday.

M: Ricardo Velazco, Louisville: The sophomore transfer had a goal and an assist from the Cardinals in a 2-1 road win over Virginia on Friday. After spending last season with Cal State San Bernardino, the Real Salt Lake prospect looks to be playing at a level that will challenge him now.

M: Fabian Herbers, Creighton: The freshman had a goal and two assists for the Jays in a pair of victories over the weekend. Herbers netted the game-winner on Friday in a 2-0 victory over Tulsa. He finished the weekend with a pair of second-half assists against Creighton.

M: Patrick Huang, UAB: The senior midfielder helped spur on the highly explosive Blazers attack with two goals and an assist over the weekend. Huang had an assist in the 4-0 win over VCU, and then added two goals in the 5-1 spanking of High Point on Sunday.

M: Goffin Boyoko, UC Santa Barbara: The midfielder headed in the game-winner for the Gauchos on Sunday in a 1-0 win over UIC. He also had two goals on Friday in an important 3-1 road win over Northwestern.

F: Pete Caringi III, UMBC:  Scored four goals in UMBC’s two wins over the weekend. Caringi’s second half brace against UNLV propelled the Retrievers to victory. He was name the Most Valuable Player of the Springhill Suits Arundel Mills BWI Kick-Off Classic.

F: Sagi Lev-Ari, Cal State Northridge(m): The striker notched a hat trick in 21:57 on Sunday in the second half of the 4-1 win over Memphis. The Matadors opened the season with two wins and Lev-Ari looks like he is picking up right where he left off in 2012.