Sometimes, the year after a deep tournament run, some programs struggle to string together a successful season.

Not Charlotte – at least not yet.

If anything, the 49ers have picked up and carried over the success from a season ago into the early stages of the 2012 season, holding a 4-0-1 mark through the first few weeks. 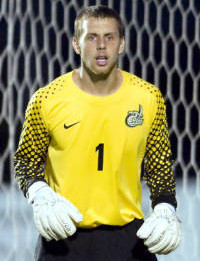 “The results are going great so far, the players are really excited, motivated and looking good and up the challenge of the season,” new head coach Kevin Langan told TopDrawerSoccer.com. “We’re very happy with it, but we understand it’s just the start.”

The early success appears to follow a very similar formula that the squad used a year ago. A stout team defense (two goals conceded in five games), timely scoring (two game-winning goals in overtime) and contributions from different players in different games (six players accounting for eight goals) were all harbingers of the team that lost to North Carolina in the national championship.

And that’s just how Charlotte has made it this far without defeat. Starting the season off with two overtime wins against Denver and Coastal Carolina was also important because it reflected the team’s high level of endurance early on in the year.

“What was very pleasing was the fitness the guys showed,” Langan said. “Even though it’s early in the season we looked super fit and ready to push.”

His first season in charge of the 49ers has eight starters from last year’s squad back in the mix, so it’s an experienced group. That includes forwards Donnie Smith and Giuseppe Gentille, midfielder Tyler Gibson and goalkeeper Klay Davis among those playing a key role again this year.

Those players provide the backbone of the team, that took to the road last weekend in its first trip away from Charlotte in the regular season, picking up two wins against Stony Brook and Kentucky.

The success proved the team could shift how they play away from home.

“It’s a different mindset, different mentality on the road, you want to start with your team being tight and organized and almost a siege mentality, we’ll call it, when you’re on the road,” Langan said. “From that base you can play more attacking soccer and get a foothold in the game. That was our mentality going into it and the guys did the most of it.”

Along with getting the results and showing that ability to cope with the road games, the trip away from home also gave the group a chance to grow together.

“There are so many other benefits being on the road as well,” Langan said. “The new players who come in feel that camaraderie, they spend a lot of time in the hotel, traveling – we traveled on the bus together for seven hours. Those away games, especially when you get a victory, really bring the group together.”

Strong start or not, Langan was adamant that the team isn’t getting carried away. They don’t begin play in the Atlantic 10 until October 5, and are planning on using the remaining couple of weeks of non-conference action to continue sharpening the offense and continue to work towards another successful season.