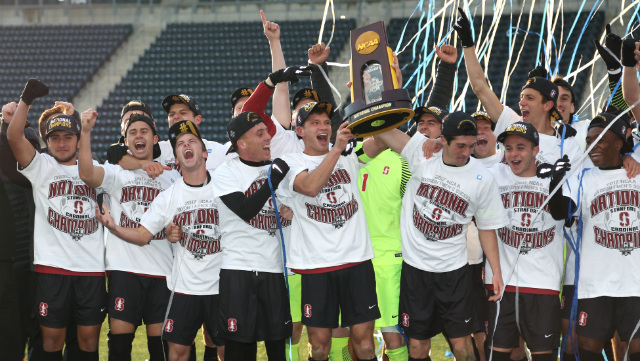 And Sunday’s matchup of the top two defenses in men’s college soccer was always going to be a tight affair. Add in the compact window to inhibit rest, and it was going to take a moment of magic or a mistake to separate Indiana and Stanford.

In the end it was the latter.

Sam Werner stripped Griff Dorsey in the Indiana box in the second overtime, lashing home the winning goal in the 103rd minute to secure a third straight national championship for the Pac-12 dynasty.

"I thought it was a cracking game," Stanford head coach Jeremy Gunn said. "When you watch the game it is pretty obvious why both teams were there. Great attacking players who can score goals, but wonderful work ethics from both teams where both teams were willing to work hard defensively, and really make life difficult for other opponents."

Indiana opened the first 10 minutes looking to carve into Stanford’s stout back line. There was a glimmer of a chance when Rece Buckmaster’s cross found the foot of Austin Panchot. He could only glance the ball well wide of Nico Corti’s goal with a spinning volley.

From there the game ebbed and flowed in the midfield. Stanford got the first shot on goal in the 10th minute when Jared Gilbey won the ball, and threaded a pass in for Bryce Marion. Freshman goalkeeper Trey Muse was equal to it, although Marion failed to get a clean strike on it.

Stanford wrestled control of pockets of the first half, but failed to create clear chances. Corey Baird volleyed wide in the 19th minute, and Foster Langsdorf had an effort easily claimed by Muse.

The freshman came up huge to keep the game scoreless in the 65th minute. Foster Langsdorf slipped Baird in behind the IU defense, though Muse made himself tall and turned the shot aside.

Despite conceding the winner late, Muse earned praise from his head coach after the game.

In the final third, however, IU struggled to look dangerous. Griff Dorsey registered his side’s first shot on target, a tame looping header easily claimed by Corti. Justin Rennicks led IU on a promising break, though he took too many touches and the Cardinal defense recovered. A low cross from Francesco Moore was cleared from danger by Hilliard-Arce in the 83rd minute.

For every moment that looked like it could be dangerous, whether it was Indiana or Stanford, each team's back line would pounce and close quickly.

"I think both defenses were really tested today and we have these discussions about how to play and I think both teams managed to mix it up pretty well," Gunn said. "They could go big and test defenses and when you play against some of the fragile defenses we've seen that are only passers and not defenders, that route can test people and create chances. Today you saw both defenses were happy to handle that and then both teams could play the ball on the ground with little slip passes and some of what we call the beautiful soccer and both defenses held tight with that."

Before Werner's winner, penalty kicks looked inevitable. As each team took care of business in front of their respective goals, there was little on offer. Tomas Hilliard-Arce always seemed to be in the right place at the right time, whether to get his head on the ball or clear the ball from a dangerous position. By limiting mistakes in front of Corti, Stanford eventually put itself in position to converge on one -- which they finally did.

NOTES: With the win, Stanford became the first team to capture three straight national titles since Virginia won four in a row from 1991-94...For the first time in college soccer history, one university holds both the men's and women's Division I titles. 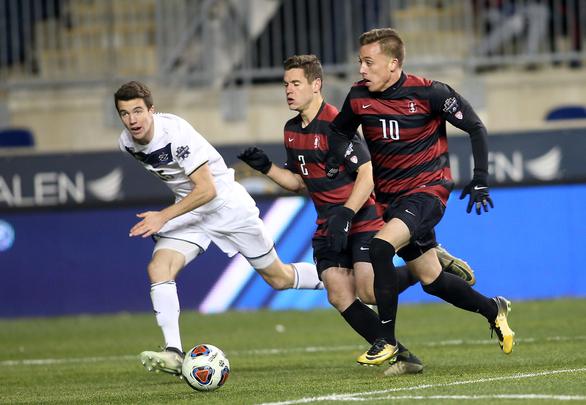