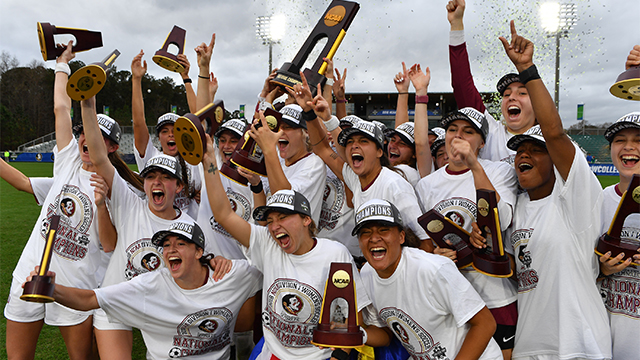 CARY, N.C. — There was a distinct Carolina blue hue to the Women’s College Cup finals crowd of 12,512 that filled WakeMed Soccer Park Sunday, with the North Carolina Tar Heels’ pep band blaring from a far corner of the north grandstands. However, the Florida State Seminoles turned the town garnet and gold, defeating the Tar Heels 1-0 off a second-half goal by senior Dallas Dorosy, her fifth in nine postseason matches this year.

“When that one moment pops up and one of our playmakers finds that spot, that’s when the goals come,” said Seminoles head coach Mark Krikorian. “And that’s what happened today through the course of the game. Both teams had limited chances at goal, but fortunately for us, we had the quality to finish the one big chance that we got.”

“I’m very proud of our kids,” said UNC head coach Anson Dorrance. “My fabulous player leadership has been among the best of any team I’ve ever coach. I want to tip my cap to Mark Krikorian, his excellent staff, and his fine players—they’re a fabulous team. But I’m also incredibly proud of our season and even the way we played today.”

“They say soccer can be unfair sometimes,” said UNC senior Julia Ashley after the match, with the Seminole war chant bombinating in the background. “They got that chance, and we couldn’t capitalize on ours today.”

After a pre-match spectacle featuring pyro and a fly-over, the familiar foes played like squads who had already faced each other twice this season. Sporting the same starting XIs as their semifinal victories on Friday, both teams played to type: Florida State looking to control possession in the midfield and the Tar Heels racing into attack along the edges.

In the 23rd minute, ACC Freshman of the Year Yujie Zhao played a ball into FSU teammate Dallas Dorosy, but Dorosy’s shot flared right of frame. In the 42nd minute, Zhao delivered a deft aerial service into the area that brought out Tar Heels goalkeeper Samantha Leshnak, but when Dorosy was first to the loose ball, she again couldn’t direct her shot towards the open goal.

The Seminoles found the game-winner in the 60th minute. Probing up the right flank, FSU’s Deyna Castellanos slipped an angled through ball near post past two Tar Heel defender. Dorosy slid through UNC center back Lotte Wubben-May and obligingly redirected the orb past Leshnak for the 1-0 advantage.

“Deyna gave me a perfect ball, and I just threw my body in there with everything I had,” Dorosy said. “I didn’t even know it went in until I looked up about ten seconds later, and it was in the back of the net. I just couldn’t believe it.”

“When we eventually figured out how fast Dallas is [after she arrived to FSU], we were able to find seams for her to run into and play her through,” Krikorian said. “With the quality that Deyna brings, if that seam appears they’re going to find it and give a well-weighted pass.”

With the pressure heightened, the Tar Heels flung themselves forward over the ensuing 30 minutes. In the 85th minute, Brooke Bingham made a long run and sent a through ball that split the Seminoles’ center backs. However, UNC’s Taylor Otto couldn’t reach the service before FSU goalkeeper Caroline Jeffers.

Florida State cleared away a UNC free kick off the left wing with 20 seconds left in the match. The Seminoles then fouled Leshnak, who had come forward into attack, but referee Lance VanHaitsma didn’t halt the running clock, which struck 0:00 before the Tar Heels could execute a final set piece.

Florida State held their opponents scoreless for their final three NCAA Tournament matches, including both College Cup games. The Seminoles held UNC to just eight shots on Sunday, including just two on goal.

“The whole team has to be committed to defending,” Krikorian said. “When you’re playing against high-powered teams like Carolina and Stanford and Penn State and Southern Cal, you darn well better have a plan and you have to get a little lucky, too.”

Notably, Florida State shut down the long center runs that UNC midfielder Dorian Bailey made Friday against Georgetown. Bailey attempted a whopping eight shots (three on target) against the Hoyas, but FSU held her without a single shot Sunday.

“When you play a conference opponent, they know your personnel,” Dorrance said. “The amount of investment that Dorian made on Friday was off the charts … When you’ve just shredded your legs on Friday, coming back on Sunday and having the same sort of impact is remote. I certainly want to credit what Florida State did, which is mark an elite conference player who they knew very well. But when you make that kind of investment on Friday, it’s going to be impossible to have same level of investment for a two-game weekend.”

“You could tell that the quality [of play] today probably wasn’t as sharp,” Krikorian claimed. “The games Friday were late night with a lot of running, so I’m hoping that at some point they can look at maybe adding an extra day to give the players a chance to have more recovery and look out for the best interests of the student-athlete, because they’re at risk for injury if we don’t give them proper recovery.”

Dorrance said that although both losses to FSU in the ACC and NCAA Championships were one-goal deficits, he believes his team played virtually even with the Seminoles on Sunday.

“The difference between our loss to Florida State in the ACC final and today is that we closed the gap,” Dorrance said. “Everyone who watched the ACC final knows it was a clear statement about Florida State being the superior team. Today, if you clip out the goal [FSU] scored and asked anyone to saw the game who won, they’d say North Carolina … At worst, if you look at the match itself, the game’s a tie.”

“You’re talking about the margins being so small between their quality players and our quality players,” Krikorian echoed, “and the experience their staff has in designing different situations to minimize the effectiveness of our players.”

Florida State senior Natalia Kuikka hails from Finland and said she had little knowledge of American college soccer before Krikorian recruited the defender to Florida State. Krikorian indicated last week that Kuikka plans to return to Europe to play professionally.

“Playing my last game in my last year, I just wanted to win this so bad,” Kuikka said. “It means a lot. It’s every girl’s dream to win a national championship. I have no words.”

Florida State becomes just the sixth school to win multiple NCAA Women’s College Cups, following their 2014 title. The Seminoles have also played in ten of the last 16 Women’s College Cups, but this year is their first since 2015. Krikorian said Sunday’s championship is the culmination of changes his team has embraced the past several years to reclaim its place atop the college soccer world.

“We knew we had to retool our group a little bit and reevaluate how we were doing things,” Krikorian said. “All the kids who have been a part of the program for the last few years were very open-minded to it. Today, they get the reward for it.”