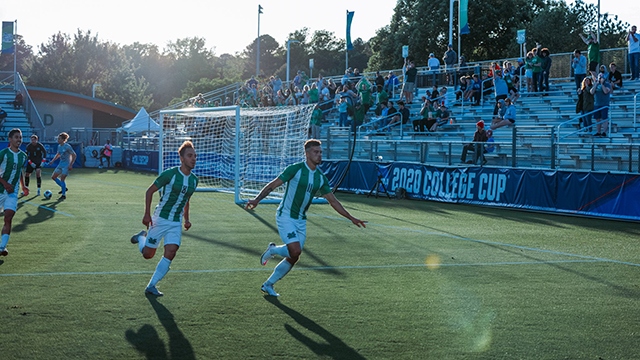 Marshall’s stampede in the 2020-21 NCAA tournament will continue for one more game.

The Thundering Herd produced another defensive masterclass in North Carolina, defeating the Tar Heels by a 1-0 score in the first men’s DI semifinal on Friday evening.

One shot was all Marshall needed on the evening, as a Jamil Roberts finish in the 60th minute provided the winning margin for the Conference USA champions.

Despite the fact that the Tar Heels were playing in their back yard in Cary, the match featured plenty of Marshall support, with scores of Herd fans clad in green throughout the stadium. But it was the ACC side that enjoyed the brighter moments in the first half, outshooting Marshall by a 6-0 margin at the break. Goalkeeper Oliver Semmle had a few nervous moments, but kept the zero through the first 45 minutes.

With both sides favoring a cautious approach, seeking to create chances through patient buildup or set piece opportunities, the opportunities were few and far between in the early stages of the second half.

Digging in and defending well, Marshall looked for that tiny window of opportunity to find the back of the net. It came in the 60th minute, with the familiar combination of Vitor Dias and Roberts. A ball played towards the top of the UNC box was dummied into the path of Milo Yosef. He cut the ball towards Vitor Dias, who turned his defender, deflecting the ball into the path a wide-open Roberts, who slotted the ball past Alec Smir.

HAVE YOURSELF A CUP OF TEA 🤩

The goal stirred UNC’s attack to life. Five minutes after going down, the Tar Heels had their best chance to equalize. Jonathan Jimenez settled onto a loose ball, driving towards the Marshall box. He was tackled, but the ball went straight into the path of Giovanni Montesdeoca, who had space to line up a venomous shot. However, Montesdeoca could only rattle the crossbar.

Pressure continued to come on Semmle and the Marshall goal, but couldn’t solve the defensive pressure applied by Marshall or find the decisive touch to equalize. This despite holding an 11-1 advantage in shots, as the Herd need just one shot and one goal.

A ninth championship is within reach for Indiana.

The stories program absorbed pressure from Pittsburgh for nearly 80 minutes, as a super performance from the ACC side came with everything but a goal. A driving run and lashing shot from Herbert Endeley decided the game, as his strike in the 79th minute proved decisive.

Five minutes into the game, Indiana had a quick chance to take the lead. A misplayed clearance by a Pitt defender fell to the feet of Thomas Warr, but his shot was deflected out for a corner kick.

Pitt dominated possession for long stretches of the first half, and created a handful of chances, if not extremely dangerous. Former Pitt defender Nyk Sessock, who had transferred to IU last year, nearly cleared a Bertin Jacquesson cross into his own goal in the 26th minute.

The talented duo of Veljko Petkovic and Valentin Noel each had chances to score before the break as well. Petkovic was found on the break, and had time and space to fire a shot outside the box. He didn’t get it right, firing the ball over Roman Celentano’s goal. Celentano made a save in the 44th minute, as he was well-positioned to deal with Noel’s glancing header.

Indiana forward Victor Bezerra tested Pitt GK Nico Campuzano with a shot from distance after the break, the Hoosiers’ first look at goal since Warr’s shot. Eight minutes later, Pitt’s Filip Mirkovic hit the bar from outside the box, bouncing away from Celentano’s goal.

Endeley final broke through with a superb solo effort, and IU soaked up pressure once again to advance.