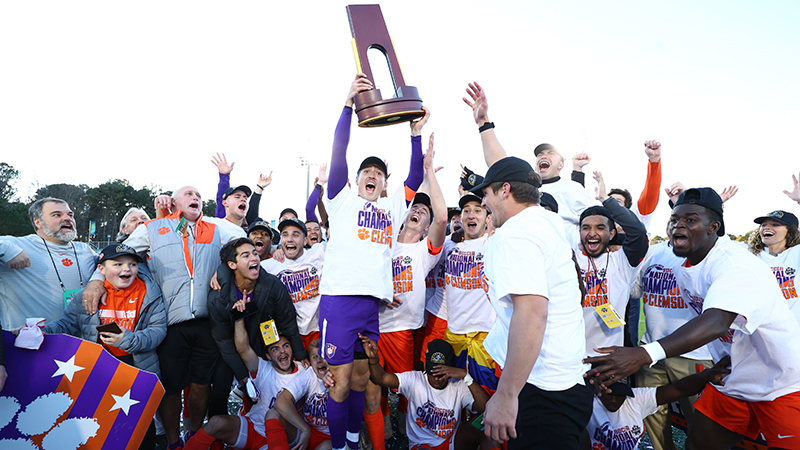 At the business end of the college season, the team that managed to make the most of the marginal moments, often finish the season at the top.

With a national championship on the line in Sunday’s College Cup final, Clemson mastered theirs. Two goals from Isaiah Reid in the game’s first 15 minutes and another stout defensive effort by the Tiger back line anchored a 2-0 win against Washington.

For Clemson, the first moment came just 26 seconds into the game when the Tigers scored first. Reid chased down an innocuous long ball fired by Oskar Agren towards the UW box. Goalkeeper Sam Fowler came off his line, but missed with his clearance attempt. That left Reid alone on the ball, and he slotted home for a dream start.

Rattled but not deterred, Washington settled into the game, seeking to quickly get back into the game, as Notre Dame had managed in Friday’s semifinal.

But it the Tigers struck again. Two shots, two goals. With an early lead, left back Charlie Asensio was aggressive with his darting runs into the attack. After, switch of the field to Ousmane Sylla, Asensio served in a ball across the penalty box that Reid headed high and over Fowler for the second goal of the game in the 15th minute.

Backed by a defense that peaked as the season progressed, and with George Marks in the form of his life, a two-goal advantage would be enough. Lucas Meek got the first shot on target in the 28th minute, an easy stop for Meeks. Clemson’s back line contained the hungry Huskies, and they wouldn’t test marks against until the 88th minute. The Tigers needed just four shots on the evening, on the way to winning a third national championship in program history and the first since 1987.