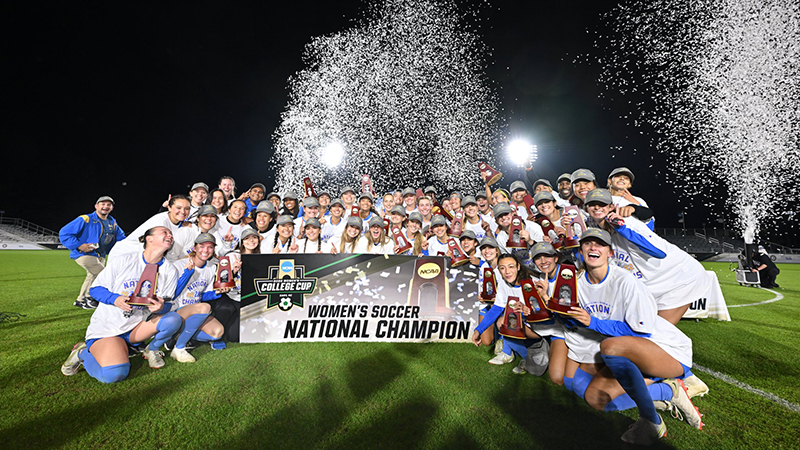 The UCLA Bruins and first-year head coach Margueritta Aozasa are NCAA champions, completing a wild comeback over North Carolina to win in overtime and hoist the program’s second title.

“I can't say enough about the belief this team has and the care that they have for each other,” Aozasa said. “We've said from the very beginning of these playoffs that our care for each other, our love for each other and love for this program is what's going to carry us through and I think you saw that tonight.”

With just 16 seconds on the clock and UNC leading 2-1, it looked like the Tar Heels and head coach Anson Dorrance were going to end its decade-long drought and secure a 22nd NCAA title. However, Reilyn Turner had other plans.

The junior forward headed home a corner from freshman midfielder Ally Lemos, which was driven right at a sea of white and blue shirts crowding the goalkeeper.

UNC redshirt goalkeeper Emmie Allen tried to get a hand up and push the ball over the bar, but with the keeper surrounded by teammates and opponents she couldn't get enough on the hard-hit cross.

“With this team, you can never ever, ever give up because we will always come back and we will have each other's back and work to the last second of the game,” Turner said, adding that she did everything she could to just get something on the ball.

“I blinked and then the ball was in the goal,” she said.

Aozasa said the team changed up its mentality with set pieces a few weeks ago after giving up what the head coach estimated to be 60% of their goals this season on set pieces.

“We decided to try to be the aggressor, to make sure that teams needed to be nervous when we had set pieces,” the first-year head coach said. “I told the team at halftime that we're going to get our chances and we're going to score a set piece tonight. I didn't know it would be such a monumental set piece, but that one will go down in history.”

Turner’s goal took it to overtime, but graduate midfielder Maricramen Reyes scored the game winner in the second half of overtime.

🚨 UCLA TAKES THE LEAD IN OVERTIME 🚨

The graduate said she came back for moments like this and she made the most of it, sneaking a rebound home to give her team the national title.

“It was just a blur. … I stayed just for this, to win, and this doesn’t even feel real,” Reyes said.

Dorrance, who has seen it all and been involved in most of it, ranked Monday’s final as one for the ages.

“This is one of the greatest finals I've personally ever been involved in,” Dorrance said. “Up and back, lots of goals, overtime, which obviously also makes it more exciting, the drama of sport, one team goes up the other one claws their way back, there is the inevitable controversy, which you know, also makes it kind of fun. … This was a wonderful sales piece for the women's collegiate soccer game.”

Sophomore forward Lexi Wright kick started UCLA’s comeback in the 80th minute, pouncing on a rebound after senior forward Sunshine Fontes’ rocket from the edge of the box proved to be too much for UNC redshirt freshman goalkeeper Emmie Allen to control.

The Heels dominated the early stages of the game and jumped out to a 2-0 lead with back-to-back headers from junior midfielder Avery Patterson in the 59th and 75th minute.

Patterson with her second brace of the season! pic.twitter.com/sgrdoAsNHy

“Avery Patterson I thought was phenomenal,” Dorrance said. “That's 90 minutes of the whole left side because when you play a 1-3-5-2 the wing backs, the left and right midfielders in the five, play the whole sideline and she played, what 110 minutes? The whole sideline, scored two goals at the back post, so I've got nothing but respect and admiration for her and this team.”

Aozasa said that the Bruins started to gain momentum after UNC’s second goal and eventually changed shape to push for the comeback.

“We were actually going to change systems earlier but there was like a solid five minutes after the second goal where we actually had some momentum and we're like, ‘Okay, let's ride this out a little bit,’” Aozasa said. “And then we change shapes. So we went to a more aggressive shape. We switched from 4-3-3 to 3-4-3. We've done this to them so many times. They probably hate it. Hate Us for it. We've never worked on 3-4-3 before. We did that when we played Duke we had never worked on 3-5-2, when we played Virginia we had never worked on 4-4-2 diamond.”

Aozasa said the players' adaptability and trust between players and staff allowed them to make those kinds of unpracticed changes.

Beating UNC in a national title game is also special in its own way, with Dorrance and the Tar Heels forming the type of program that everyone else is chasing.

“I want to congratulate and thank North Carolina,” Aozasa said. “That's a program that I think anybody involved in college soccer has always looked up to and I mean, if I do this for another 25 years with this record, I might catch Anson, his record, so he has set the standard in terms of what it means to be a winning program.”

While a national title would have made things that much better, Dorrance was proud of what his team accomplished this year. The coach noted the injuries to two top players and credited his staff naming associate head coach Damon Nahas, assistant coach Nathan Thackeray and volunteer assistant coach Heather O’Reilly.

“This team over-achieved in every respect and I'm very proud of them and my staff,” Dorrance said.

UCLA comes back from a 2-0 deficit to force overtime and defeat North Carolina, 3-2, in the College Cup championship game.

It was the first time in Women's College Cup history that a team has come back from 2 goals down to win the national title. pic.twitter.com/ZbDoTAdRGE