College duo gets look with USWNT While most college players are trying to impress their respective coaches on campus this spring, two players were bouncing around the globe, looking to catch the eye of new U.S. women’s national team head coach Tom Sermanni.

North Carolina defender Crystal Dunn and Santa Clara midfielder Julie Johnston both earned multiple call-ups to the full team in the early months of 2013, and during that stretch picked up their first caps for the 2012 Olympic Gold Medal winners. 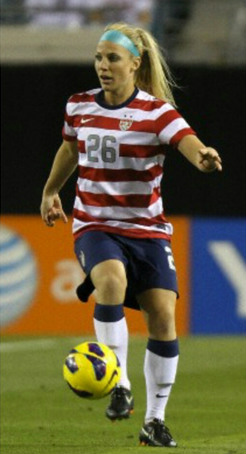 Johnston with the USWNT

“I wasn’t expecting it so soon especially after the Under 20 World Cup,” Johnston told TopDrawerSoccer.com. “But I was definitely excited when I got the news.”

Both players were called into a January training camp ahead of a pair of friendlies against Scotland, where each earned a debut cap – Johnston subbing on as a center back in a 4-1 win against the Scots on February 9, while Dunn also entered as a substitute on February 13 in a 3-1 victory.

The jump up a level and debuting for the full team didn’t come without a touch of nerves.

“I was really nervous,” Dunn told TopDrawerSoccer.com of her first cap. “But I discovered I just needed a good first touch and after that it was easier, I settled in throughout the rest of the game. The girls on the field were definitely supportive and very welcoming so it made it a lot easier when I was going to get my first cap – I definitely had their support behind me so it was easier than most people probably imagine.”

Dunn has obviously made headlines over the past year, winning the national championship and then capturing the Hermann Trophy on the heels of the World Cup victory. She did say that having someone in a similar stage of her career like Johnston helped throughout her induction to the national team.

“It’s great going through it with her, because as younger players we don’t really know what to expect, and having someone there who’s kind of on the same page as you is helpful,” Dunn said. “[We] are both in college and it’s hard balancing school and the training sessions. I never want to complain to anyone because everyone’s a pro – I can’t really be like ‘I have essays to write.’ But Julie understands everything that I go through and makes it a lot easier having someone who is also in college with me.”

After first getting the chance to impress Sermanni in the January camp, Dunn earned a call-up for the team’s trip to Portugal, where she started in a pair of games for the USWNT along the way to winning the Algarve Cup. And although Johnston didn’t get the call for that trip, the pair was reunited in March for friendlies against the Netherlands and Germany.

The learning experience on that trip continued the process of adjusting to the new demands of the highest level of soccer possible.

“Going with [the USWNT] on my first international trip was pretty amazing,” Johnston said. “I really enjoyed seeing the atmosphere firsthand, what they go through and how to take care of your body, how to play at that level, the practices. Just learning everything at a professional level, there’s no better team to learn it from than the U.S. team.”

Each player made a start during that trip, Dunn playing 90 minutes in a 3-3 draw against the Germans, and Johnston making her first start for the USWNT in a 3-1 defeat of the Netherlands.

Looking ahead, both have a main focus: a final season in college, as they will be seniors in the fall of 2013 aiming to finish already outstanding college careers. Both are looking to lean on these early year experiences to help guide them and their programs to successful season, bringing some lessons from the national team along with them.