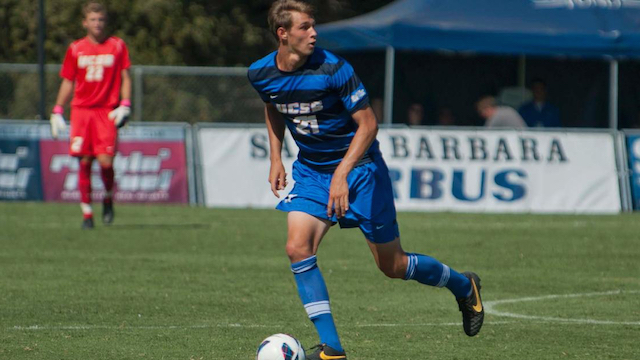 The Big West is one of the most exciting conferences in college soccer. Last season, UC Irvine and Cal State Fullerton carried the flag for the conference into the NCAA Tournament. Irvine put on a show that left everyone impressed with the program. Now, the Anteaters will have a target on their backs in a conference that should be searching for multiple seats at the table when the at-large bids for the NCAA Tournament come out.

UCSB won the North Division last season. With a young squad, the Gauchos look like they should be back in the hunt again in 2015. However, the Gauchos lost a number of those young players and it will be another new look for the 2006 NCAA Champions. There is reason to be optimistic about the mercenaries though. Incoming freshmen Sam Strong, Justin Vom Steeg, and Geoffrey Acheampong will play and improve the team immediately.

UC Davis came up just short of winning the North Division in 2015. The Aggies are an assembly line and they will continue to threaten for a top spot in the conference and division with a strong defense and an efficient attack.

Michael Linenberger is the story for Sacramento State. The coach enters his 25th season in charge of the Hornets. He has a knack for unearthing gems or exposing quality players to a wider audience. Linenberger’s success makes the Hornets a constant threat in the conference and North.

Cal Poly had the most eventful offseason. The Mustangs brought in former U.S. Men’s National Team coach Steve Sampson to lead the program. Sampson inherited a good roster to work with for his first season. Chase Minter is the best midfielder in the conference and goalkeeper Wade Hamilton is a rising star in the college ranks.

In the South Division, UC Riverside saved its best performances for league play in 2014 and it worked out. The Highlanders won the South in a close battle between all four teams. The formula could work again in 2015, but Tim Cupello and his staff had another offseason to get acclimated to the program and directed the ship toward national success.

UC Irvine is a team to watch in the Big West and on the national scene. Irvine has been aggressive in putting together a challenging schedule with road games against Omaha, Creighton, San Diego, Oral Roberts, SMU, and UCLA. That means UC Irvine won’t be at home much with only three games at Anteater Stadium prior to October.

Meanwhile, former UC Irvine head coach George Kuntz tries to push his new program past his old stomping grounds. Kuntz is trying to revitalize the Cal State Fullerton program and he made a big impact in his first season with a Big West Tournament Title and the automatic berth to the NCAA Tournament.

The Cal State Northridge roster is fantastic for 2015, but talent has never been a problem for the Matadors. It’s been about keeping that talent on the field and hoping it performs in the key moments. This could be a breakout year for the program, or this could be a building year toward something bigger. Either way, Nicolas Grinde looks like an under-the-radar signing who could be huge from day one.

San Diego won the WCC last year and claimed the automatic berth to the NCAA Tournament. The Toreros need to replace Connor Brandt and Julian Ringhof, which is no small feat. USD does return Freshman of the Year Thomas Olsen, which should really help the squad keep consistency into a new campaign. The issue for San Diego is that teams rarely repeat as winners in the conference and it would take a herculean effort to return to the top in 2015 based on the recent history of the conference.

Saint Mary’s seems like a logical challenger for the crown. The Gaels return Alex Braman and Rafael Sanchez, which makes up the core of a talented defense. However, Saint Mary’s needs to address the hole in goal as Andre Rawls graduated.

San Francisco is also near the top of the pile based of last season’s success. However, San Francisco’s viability in 2015 comes down to finding a replacement for Miguel Aguilar, which is not an easy thing to do.

LMU perhaps has the best returning talent in the conference with Adrien Perez back in the saddle for the Lions. However, LMU is also replacing a giant this season with Craig Nitti’s departure.

The losses will open up the conference and allow any of the eight programs to take a run at the title. Keep an eye on Portland as well. The Pilots could get rolling with Eddie Sanchez leading the way in 2015.

UNLV pulled off the double in 2014 with a penalty kick victory over Bakersfield in the tournament finale. Repeating that in 2015 will take a lot more. Midfielder Salvador Bernal is gone, but local boy Rodrigo Fuentes looks poised to step into his spot. Forward Daniel Musovski had a stellar debut season. If he can avoid a sophomore slump, the Rebels could be riding high again in 2015.

Seattle was the closest challenger to UNLV in the regular season. Seattle returns all three players who made First Team All-WAC. Hamza Haddadi, Ian Hines-Ike, and Kyle Bjornethun make up a good core for the squad to rally around this fall.

Incarnate Word stormed the conference in 2014 and nearly took home the regular season crown. The Texas program has to replace all conference midfielder Alex de la Garza, but the coaching staff picked up a number of local recruits with eyes on developing a few of them into stars in the conference in the years to come.

In Utah, Greg Maas continues to build a program from the ground up. Maas brought in a small but solid recruiting class for 2015, which should keep the Wolverines in the thick of the conference race.

UMKC is bringing in 15 new players this fall to help push the program to its first trip to the NCAA Tournament since 2008. UMKC only lost three starters from last year’s team, which should make practices a battle for who gets playing time.

Also of note in the conference is Grand Canyon bringing in a new coach in Schellas Hyndman for this season. Hyndman previously coached FC Dallas and heads to the Arizona program that only won two conference games last fall.