The #13 Xavier Musketeers have been ripping through opponents all season, but last weekend their dominance reached a new level last weekend. Senior Luke Spencer had two goals and three assists and the Musketeers cruised to 6-0 and 5-0 wins over Rhode Island and Massachusetts. Spencer collected the TopDrawerSoccer.com Player of the Week honor* for his contributions to the offensive onslaught.

The Musketeers’ six-point weekend was not enough to get back on top of the Atlantic 10 conference. Charlotte finished first in the standings with Saint Louis in second and Xavier in third.

The A10 Championship kicks off on Thursday with the quarterfinals. 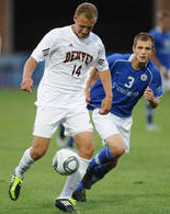 Cal Poly finished the season with wins in four of the last five games to go from last in the Big West North Division to second, which was enough to qualify for the Big West Championship.

The Mustangs sealed their spot in the conference tournament with a 1-0 win over UC Santa Barbara on Saturday in front of a sold out home crowd. Junior midfielder George Malki is the Big Man on Campus after scoring the game-winner.

Cal Poly takes on top seed Cal State Northridge(m) on the road on Wednesday. In the other semifinal, Cal State Fullerton travels to UC Davis. All four teams are looking to win their first Big West Championship.

UCLA looked to be in firm control of capturing another Pac-12 title last week with only six points needed from the final three games of the season, but after a 1-1 draw against California on Sunday, the race is coming down to the wire.

Washington is two points back and would need a win against Oregon State on Friday and a loss by UCLA against San Diego State. The games both kick off at 1:30 p.m. (PT).

All Eyes on San Diego

The West Coast Conference comes down to Sunday in San Diego. Santa Clara takes on San Diego with the automatic berth to the NCAA Tournament on the line.

San Diego currently holds the top spot with a two-point lead over Santa Clara and two games to go. The Toreros face Saint Mary’s(m) on Friday in the penultimate clash on Friday. Santa Clara is at LMU with hope of closing the distance on San Diego prior to Sunday’s contest.

Denver beat Air Force 3-2 in the final regular season game for both teams last week. Midfielder Zach Bolden was the star for Denver with a goal and an assist in the performance.

Despite the loss, Air Force still held onto the #3 spot in the MPSF standings and faces off against UNVL(m) in the first round of the conference tournament. Denver plays San Jose State.