For most men’s college coaches around the nation, regardless of sport, signing day represents a proverbial lock on the door. The fickle nature of verbal commits finally gives way to the comfort of pen on paper. Decommits happen, but once signing day passes the likelihood plummets. For at least one day a year, coaches can exhale. 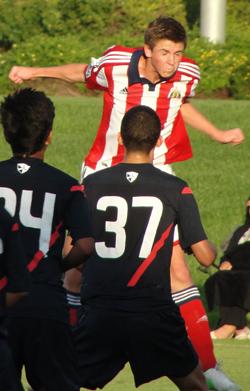 Most coaches, anyway. A college football coach can rest easy knowing his recruit’s only real option is to play at least two years of college ball before turning pro. Basketball coaches are guaranteed at least one year with future NBA draft picks, and while Major League Baseball allows its players to go pro after high school, players who opt to turn down a pro contract out of high school to attend college are not draft eligible for another three years.

In that sense, college soccer recruiting contains a nebulous constellation of roadblocks all its own. With the allure of a global professional market always braying at the door, signing day doesn’t represent the finality it does with most other sports. Only a small percentage of players buck scholarships each year to take the professional road, but the specter and allure of the pro game is always looming overhead like a slumbering giant for the best and brightest of the college game. And that creates a unique signing day reality.

So how much does that weigh on coaches on the recruiting trail?

“I don’t think you can approach with that in mind,” Tommy McMenemy, Michigan’s assistant coach and recruiting coordinator, told TopDrawerSoccer.com. “You try to develop the relationship with the player. It’s a step in their longterm goal. The landscape is changing and that is a good thing for soccer in this country. “

Changing indeed. The reality is that recruiters for soccer programs are constantly forced to compete with professional sides from the moment the player opts to attend school to play soccer. One of the most notable cases came from Paul Arriola, who had already signed for UCLA last year before opting to sign a pro contract with Tijuana.

“After training with Tijuana in December, then going to preseason with L.A. in January I was able to get a feel for how I’d fit in at both of the clubs,” Arriola told TopDrawerSoccer.com last May. “I made very clear to all of my options (LA Galaxy and UCLA) that I wanted to be a pro and Tijuana was very much an option.”

In some sense, when players like Arriola bolt for the pro ranks, it can’t be considered much of a surprise. UCLA knew he wanted to be a pro, and they likely made the appropriate contingencies in case he did. But the program could’ve also been excused for hoping that its signed commitment bound itself to the player, at least for a season. After all, what’s the point of a signing day if it isn’t to nail down signings? Similarly, can you begin building a tactical framework around a star pledge who might exit for the pros before he ever steps foot on campus? Even after signing day?

Dealing with caveats like these present a unique set of challenges, especially for programs that’d like nothing more than to build around top players like Arriola and Caleb Calvert, who spurned his verbal commitment to UC Santa Barbara last summer to sign a homegrown deal with Chivas USA. Just months earlier, forward Ben Spencer set aside his verbal commitment to UCSB to sign a pro deal with Molde FK in Norway. Two of the biggest pillars in the Gauchos’ recruiting arsenal knocked out from under them in a six-month period.

“It’s very hard to plan ahead,” said UCSB coach Tim Vom Steeg. “Now all of the sudden I think you’ll find that programs are over-recruiting to try and protect themselves.”

That’s an uncomfortable reality for Vom Steeg, who also lost talented attacker Emmanuel Boateng to Sweden just weeks before the start of the 2013 season. With the specter of Homegrown contracts and scouts from all over the world hovering over the most talented on the lot, recruiting top college players and keeping them on campus is becoming an increasingly tough task. That’s why over-recruiting as a practice has skyrocketed. Coaches will knowingly recruit more players than they have scholarships for as a contingency plan in case a a player leaves before the first day of practice.

“I’m still very uncomfortable with having conversations with kids and parents and saying certain things and telling them this is the offer and this is what’s on the table, knowing that if everyone did come, you’ve got a problem,” Vom Steeg said. “Over the past two years, it’s created a problem for us at UCSB because I really do have a difficult time recruiting kids off the fact that someone may leave or may not show up. Maybe I’m just slow to the game I guess.”

This amounts to the job of two different sports rolled into one. Baseball is similar in this way since coaches have to woo highly touted recruits to spirit them away from professional opportunities out of high school. Once they’re in the program, though, the coaching staff is guaranteed three years barring a transfer. While basketball coaches can rest easy knowing players have to go through the college system, perhaps their toughest job comes later, when their pro-bound players are weighing up whether or not to stay for a second year.

Soccer coaches have to worry about both realities - both going up against professional clubs out of high school and keeping those players on their rosters when they can dash for the pro ranks at any time. Tommy Thompson is one of the latest examples. The Indiana midfielder committed to the Hoosiers as a high school sophomore and spent just one season with the program before signing a Homegrown contract with the San Jose Earthquakes this offseason. Christian Francois, who played one season at Maryland, recently signed with D.C. United through a waiver draft.

As for the solutions, some coaches have voiced support for an earlier signing day to help nail down more signings and better shield programs from decommits. But few have expressed a desire to make college soccer like its college counterparts by forcing players to stay a particular number of years before jumping to the pros. The blowback from moving to that kind of system has kept many from endorsing the switch, and it’s doubtful whether it might even help advance the system. Talented pro prospects might opt to skip college altogether en masse, thereby tugging down the level of play. It should be interesting to monitor whether that issue gains a foothold in the national consciousness any time soon. For now, it appears to be on the back-burner.

Vom Steeg tells a story about a friend’s son who turned down a contract with the Boston Red Sox to play in college after being drafted in the 12th round because his contract didn’t make it worth the trouble. The difference - or virtual lack thereof - between a Homegrown deal and the value of a scholarship in college soccer is just one of the reasons why soccer recruiting will continue to be an animal all its own.

“In our world, most of these Homegrown contracts are less than, or certainly not substantially more than a college scholarship,” Vom Steeg said. “Kids that want to be pro soccer players, it does not take a whole lot to get them to go to a Homegrown contract. There’s not a lot of money on the table here. Especially not when you look at first and second round players in the NBA or in baseball. Those guys are signing for good money. In soccer, it’s almost like, I got offered any kind of contract and they sign. You’ve seen this in the past couple months. You find another player who’s left their program or signed a Homegrown or just isn’t even going to college.”