Come the summertime, it’s common for some of the top men’s collegiate players to head home and hone their skills in the USL Premier Development League.

A number of stars are heading in that direction. Here’s a look at where 15 of the nation’s top collegiate players are set to compete in the summer:

MF/F Robbie Lovejoy – North Carolina, Junior, Carolina Dynamo: Lovejoy is playing for the Carolina Dynamo for a second consecutive summer, as he looks to continue shining as the outside

MF Dylan Mares – Louisville, Junior, Chicago Fire: An exciting attacking midfielder, Mares was lost for the season to an ACL tear. Now back, he’s set to play for the Fire PDL side this summer to complete his recovery and reach full fitness. 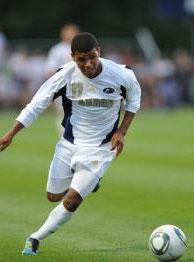 F Steve Neumann – Georgetown, Junior, Reading United: Neumann, a speedy poacher who can score in a variety of ways, will be playing for Philadelphia Union affiliate Reading United, a team that has seen a number of its alumni reach the next level.

D DeAndre Yedlin – Akron, Sophomore, Seattle Sounders U23: The Freshman All-American and speedy right back is heading home to play for his Academy’s new U23 PDL team in Seattle.

F Patrick Mullins – Maryland, Junior, New Orleans Jesters: Mullins returns to his native Louisiana to play for the New Orleans Jesters for a second season. The Jesters open their season next Saturday, May 19, as they host the Texas Dutch Lions.

MF Nick Palodichuk – Duke, Sophomore, Seattle Sounders U23: Palodichuk returns to his native Pacific Northwest for the summer to play for the Sounders U23 side. His involvement this season is tentative, however, as he recovers from an ankle injury suffered in the spring season at Duke.

D Sebastian Ibeagha – Duke, Senior, Carolina Dynamo: The central defender and Houston Dynamo Academy graduate is staying close to Duke and playing for the Dynamo, where he’ll be the teammates with a number of North Carolina standouts.

MF Robbie Derschang – Akron, Junior, Real Colorado Foxes: The left-sided midfielder who transferred to Akron after a couple years at SMU is heading close to home to play for the Foxes.

F Gyasi Zardes – CSU Bakersfield, Junior, Ventura County Fusion: The Galaxy Academy product who found the back of the net early and often last year, is sharpening his skills north of LA for the summer.

F Sean Okoli – Wake Forest, Sophomore, Sounders U23: Another graduate of Seattle’s Academy, this pacey winger/forward is also going to be playing close to home.

D Eric Miller – Creighton, Sophomore, Portland Timbers U23: After a strong freshman year, Miller has earned call ups into the U.S. U20 MNT camp. He’ll look to continue improving this year up in the Pacific Northwest playing for the Timbers U23s.