With only eight teams left in the Division I women’s soccer tournament field, the pressure of knockout soccer continues with College Cup spots at stake.

There will be at least two ACC teams in the final four, as six of the eight teams left in the tournament represent the powerhouse league. Four tremendous matchups are in store for the post-Thanksgiving weekend. Here’s a breakdown of what lies ahead. 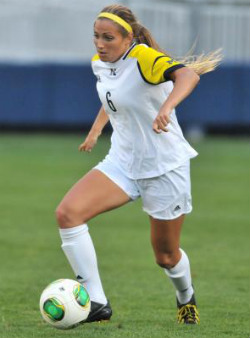 These two sides played a classic in the regular season. The Eagles jumped out to a 2-0 lead early in the first half, triggering an offensive explosion from both sides that ended with Florida State coming back to win 4-3.

One of two all-ACC clashes, this might be the higher scoring affair, depending if the Eagle offense can continue to roll. Haley Dowd, McKenzie Meehan and Stephanie McCaffrey have developed into a dangerous attacking trio, scoring 10 goals so far in the tournament to this point. The Seminole defense makes a case for one of the best in the nation, however, led by defender Kassey Kallman and Kristin Grubka, with Kelsey Wys in goal.

Key Matchup: The wily, talented veteran center back Kallman’s duel with Meehan is sure to be a focal point in this game. Meehan, who has 20 tallies on the season, netted twice in the regular season meeting and must be contained for FSU to gain the upper hand.

Player to watch: Icelandic international and junior midfielder Dagny Brynjarsdottir has discovered her scoring touch of late, bagging four goals in the last two tournament games and has 14 on the season. If the Seminole defense concedes chances and this one becomes a shootout, her finishing ability becomes critical.

Before the regular season, expectations from most observers were to see the Blue Devils still be in the mix at this juncture of the season. But after a rash of injuries, it seemed like Duke would’ve been knocked out much earlier. Two penalty kick wins and another strong defensive effort later, Duke is still dancing, just a win away from the College Cup.

Standing in their way is a team that hasn’t been here – ever. Virginia Tech made its first quarterfinal in program history with last week’s shootout triumph against Santa Clara, and is a tough out. The experience edge is obviously in Duke’s corner, but the Hokies have the talent to punch a ticket to Cary.

Key Matchup: The pace of Jazmine Reeves up front has been troublesome for most back lines throughout the season, as the senior speedster is difficult to track. That job will fall to the Duke defense, including senior leader Natash Anasi and talented freshman Elizabeth Raben. The battle of Duke’s defense against the Hokie offense, with Murielle Tiernan and Ashley Meier providing complements to Reeves, is one to watch.

Player to Watch: For long stretches of the season, Duke struggled to score, as the attack sputtered despite a plethora of talent in Durham. Senior Kim DeCesare stepped up last time, scoring twice against Arkansas to help secure advancement – just her fifth and sixth goals on the year – and she’ll need to deliver and push the attack along to keep Duke in the mix.

The Wolverines are one of the teams standing in the way of an all-ACC College Cup. Do they have what it takes to beat Virginia? On paper, it’s a tough matchup for both sides, despite the success of the Cavaliers to this point, as Michigan has a strong blend of experience, talent and quality in all aspects of the game.

That might not be enough, as Michigan faces an ACC opponent for just the second time this season, and at Klockner Stadium no less, where UVA has yet to drop a game this season. What’s also unique about this encounter is that both teams are likely to start freshmen in goal, with UVA’s Morgan Stearns the favorite to start and Michigan’s Taylor Bucklin playing all but 22 minutes to this point in the season. Penalty kicks would be all the more intriguing between two freshman netminders, should it come down to that.

Key Matchup: The Virginia defense has been superb all year long – nearly as good as its explosive offense. One of its biggest tests of the year will come this week in the form of Wolverine forward Nkem Eziruke. A Canadian international, Ezurike’s brawn, pace and power are a handful, one of the dangers defender Emily Sonnett and the rest of the UVA defense must cope with in order to reach the College Cup.

Player to Watch: While Ezurike lines up on the other side, Virginia has a forward of its own in the middle of a fantastic season. U.S. U20 WNT hopeful Makenzy Doniak has 19 goals and 5 assists in her sophomore campaign, getting on the end of numerous chances created by Morgan Brian and the rest of the UVA midfield.

With respect to the other three games, this is the match of the round, as the Bruins return to Chapel Hill, the site of UCLA’s only loss in the 2013 regular season. The health of UNC star Crystal Dunn – who came off after just 16 minutes in the third round win over Texas A&M is sure to take front and center. Even if she’s not 100%, her presence on the field can open up chances for other players like Kealia Ohai or Summer Green to make things happen in front of the Bruin goal.

However, the defenses for both teams are the true story entering Saturday’s clash. The Bruins have conceded just nine goals all season, only two in their last 10 games, behind the work of center back Abby Dahlkemper and goalkeeper Katelyn Rowland. On the other side, UNC’s defense has posted three shutouts in the tournament and conceded only three goals in their last eight games, with Megan Brigman and Hanna Gardner solid and steady all season. Behind the back line, senior goalkeeper Anna Sieloff is the hot hand in goal, giving the Tar Heels another line of defense.

Key Matchup: A lot of this depends on Dunn’s health and availability. Even if she’s not fully fit, the battle in the midfield will still determine this game, as Sam Mewis and Sarah Killion will look to impose themselves against the likes of Amber Munerlyn, Kelly McFarlane and Katie Bowen – or whoever else comes off the bench for Anson Dorrance. The regular season meeting was dominated by UNC, outshooting the Bruins 23-6, but that was all the way back in September. That must change in order for the visitors to have a chance.

Player to Watch: It’s going to take a lot to blank the Heels, though UCLA is going to look to try and find goals. To accomplish that, they’ll turn to midfield maestro Sam Mewis. The lanky attacking midfield compiled four assists in the last two games, and if she can continue to pick out the right pass, things just might break UCLA’s way.