Retrospective is sometimes illuminating and other times reassuring.

On the heels of end of the 2012 women’s college soccer season and the first NWSL draft, it seems fitting to examine how TopDrawerSoccer.com’s top 10 players from the Class of 2009 club rankings progressed through college. 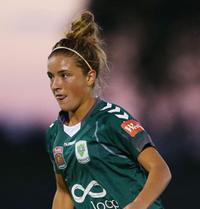 There were players who met the mark, players who exceeded expectations, and those who never really came to reach the potential that many saw only four short years ago.

Kristen Mewis, the top player from that class in the final release of the rankings, was the third overall selection in the 2013 NWSL draft by FC Kansas City. Mewis concluded her career with Boston College with 39 goals and 38 assists in 89 games. The talented midfielder has been on the cusp of breaking through to the full women’s national team for the past year or so, and likely will make her mark on the big stage in the coming months.

While Mewis is a success story for the most part, Kim Castleberry’s tale is not quite as cheerful. The Texan spent time in the top spot of the rankings in 2009 and ended up as the second ranked player from the class before enrolling at Texas A&M. Castleberry transferred to TCU in 2010 where she had her best season with five goals in 17 games. An injury in 2011 kept her out of the picture in her junior campaign, and then she dropped off the map (in terms of soccer) in 2012. She is still a student at TCU, but no longer listed on the soccer team.

Amber Brooks, the 2012 TopDrawerSoccer.com Player of the Year, checks in at No. 3 on the 2009 rankings. Brooks also spent some time in the top spot during her club career. The recent addition to the Bayern Munich squad had a standout career at North Carolina, which concluded with the program donning her initials on the No. 22 jersey.

Former Boston College forward Victoria DiMartino was the No. 4 player in the final rankings. DiMartino was a third round selection by the Western New York Flash in the recent NWSL draft. DiMartino scored 34 goals and contributed 25 assists in 91 games at the collegiate level. She ranks third on the all-time list for career points at Boston College.

Amazingly, no other player in the top ten from the class of 2009 was selected in the four rounds of the inaugural NWSL draft.

Cloee Colohan is the top ranked player from the class of 2009 who still has another year left at the collegiate level. Colohan, the sixth ranked player from the graduating class, used her medical redshirt in 2009 with Portland and will be a senior in the fall. The U.S. youth national team standout had two successful seasons with the Pilots before transferring to BYU last season. Colohan started 24 games in 2012, and is expected to be one of the key pieces for the Cougars in 2013.

Stanford standout Courtney Verloo, the No. 10 player from the class of 2009, also has a year of eligibility left. Verloo lost the 2011 season to an injury and will be a redshirt senior in the fall. The former Gatorade State Player of the Year for Oregon has 14 goals and 19 assists in 73 games for the Cardinal.

TopDrawerSoccer.com’s Top 10 from the Class of 2009

* = one season of eligibility remaining