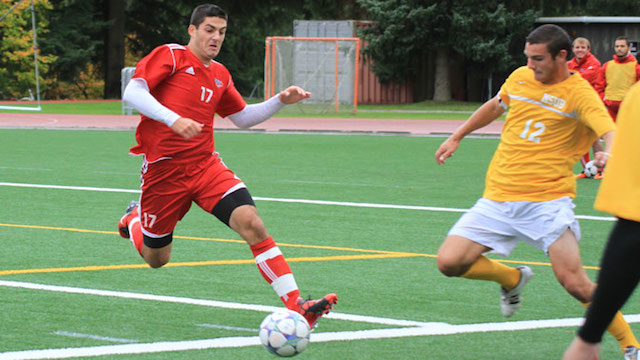 While the men’s Division I tournament just got its bracket filled, the Division II and III ranks are already through with their first two rounds of action. And what a weekend of soccer it was.

From a DII Canadian side upholding the Maple Leaf banner to a defending DIII champ mowing through opponents through the first two rounds, here’s a look at what we’ve seen so far.

It’s been a rough year for Canadian soccer. The senior national team didn’t win a game and scored just one goal during the 2013 calendar year. Toronto FC was a disaster. And while the Vancouver Whitecaps won the Cascadia Cup, they failed to make the playoffs and sacked manager Martin Rennie at the end of the season.

Enter Simon Fraser, Canada’s last hope for a trophy in 2013. The Clan climbed to No. 1 in Division II early in the season before losing to Seattle Pacific in early October and falling back. The latter explains Simon Fraser’s No. 4 seed, but the former explains why the Clan are still playing. They blasted California Baptist 5-0 and then got a 105th-minute winner in a 2-1 victory over Cal State Los Angeles to climb into the third round. They’ll face No. 2 UC San Diego in the third round on Friday.

Strange scheduling gives some No. 1 teams byes, passes others

The Division II men’s bracket fell prey to a series of odd scheduling quirks that allowed a handful of No. 1 seeds to bypass games last weekend. Top seeds Cal State Los Angeles, Ohio Dominican, Slippery Rock, LIU Post and Limestone had to play second round games while Lindenwood, Regis and Rollins won’t have to play until the third round this weekend.

Considering the carnage inflicted upon No. 1 seeds last weekend, it proved to be a huge if arbitrary leg up. LIU Post was the only top seed to win last weekend, a 6-1 win over No. 4 Dowling advancing them to the third round against Southern New Hampshire. Otherwise, top seeds went 0-4 last weekend. The remaining top seeds open tournament action on Friday.

There’s only one No. 5 seed left in the tournament, and it just upset top-seeded Ohio Dominican. That team is Lewis, which delivered a shocking strike in overtime to move into the final 16 of the tournament. A 98th minute goal from Lenin Roa-Tapia pushed Lewis into the round of 16 for the first time since 2009. If you’re looking for a lower seed to bull through the rest of the tournament and perhaps steal some glory, Lewis is your team.

Down goes No. 1 Ohio Wesleyan

It took exactly 90 minutes for Rose-Hulman to shock the Division III soccer world. After squeaking past Penn State Behrend in penalties in the first round, Rose-Hulman had a date with power Ohio Wesleyan, which was fresh off an unbeaten 19-0-3 regular season and was the heavy favorite to win the tournament after going through the second half of the season as the nation’s No. 1.

But Saturday’s shocker upset the apple cart. Mike Smyser scored in the opening five minutes, and Rose-Hulman fended off attack after attack to hold up impressively for the clean sheet. Indeed, the Biships out-shot Rose-Hulman 23-4 over the course of the match. It was most likely the biggest upset in program history.

While the Division III tournament isn’t seeded, Rose-Hulman’s win sent shockwaves through the tournament and significantly changed the balance of power. The five-loss cinderella side keeps marching this weekend with a matchup against Franklin and Marshall.

While a number of impressive patterns emerged through the first two rounds of the tournament, no two attacks put up more terrifyingly efficient numbers than St. Lawrence and Messiah.

In wins over Thomas College and Wheaton (Mass.), St. Lawrence has accumulated a cumulative 13-1 scoreline. That’s the most goals scored by any DIII men’s program in the tourney through the first two games. In the latter contest, the Saints blasted Wheaton 8-0 to stride into the Sweet 16 with a 17-2-2 record in tow. Sophomore Ryan Grant put in his first career hat trick at a stage when the going is typically as tough as it’s been all season. Encouraging signs for coach Bob Durocher’s group, which faces Amherst’s salty defense next.

Messiah, meanwhile, has gotten its title defense off to a smashing start. The experienced postseason program opened up the tournament with a smashing 9-1 win over Centenary. A 3-0 win over Salisbury in the last round set up Messiah with a third-round battle against Kenyon, which upset Wheaton (Ill.) last week.

Loras squeezes into the final 16

Only one DIII men’s second-round battle went to penalty kicks, Loras’s thriller against Luther. It looked like the Duhawks might get through before Luther equalized in the 77th minute to eventually send it to overtime and then penalties. Loras was nails in penalties, hitting all of its kicks while holding Luther to just three to advance to a date with Westminster (Mo.) in the third round.