It’s that time of year. The postseason is upon us.

As the Division II regular season tapers off and teams begin revving up for the postseason, a number of conference races have already hit their critical mass. Still, there are a handful still up for grabs - including conference tournaments, which start in earnest this week - as teams plunge headlong toward the looming NCAA Tournament.

Here are a handful of teams who made especially good use of last week’s opportunities. 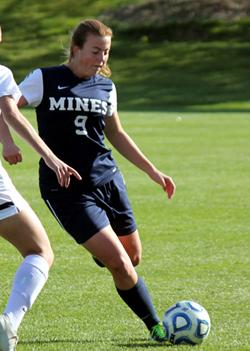 In its history, the Lindenwood men's soccer program out of Missouri had never won back-to-back Mid-America Intercollegiate Athletic Association titles, and it had never gone undefeated over an entire regular season. Both of those records were shattered over the course of eight days last week.

On Oct. 26, the Lions battered Upper Iowa 4-1 to clinch their second consecutive MIAA title in just their second year in the conference. Then, on Sunday, Lindenwood beat up on Rogers State 3-1 to close out its regular season with a 16-0-2 record, the first time Lindenwood has ever finished a regular season without losing a game. The Lions ascended to No. 4 last week, an acknowledgment of the best season so far in program history. With the playoffs just around the corner, few Division II men's teams in the nation have loftier hopes than the Lindenwood Lions.

It's been nine seasons since the Colorado School of Mines women's soccer program fired up, and it can officially call itself conference champs for the first time this year. A 3-1 win over Western State on Sunday combined with a 3-2 loss by Metro State clinched Mines' first ever Rocky Mountain Athletic Conference title in women's soccer.

It's been a season to remember for Mines. The Gunnison, Colo. program, which ascended to No. 4 in the nation last week, won its 12th consecutive game over the weekend and pushed its record to 15-0-1 and 12-0-0 in conference. And they clinched the title with two games left in the regular season, allowing the team to rest up for a hopeful postseason run. To get there, the Orediggers led Western State 2-1 late in the contest when senior Bree Archuleta iced it with her fifth goal of the season with just three minutes left in the game. Mines have now gone 19 consecutive matches unbeaten in conference.

Post has been one of the hottest teams in Division II soccer all season, and the Eagles made it official when they clinched their third consecutive Central Athletic Collegiate Conference title last week with a 4-0 win over Bloomfield. The Eagles are now unbeaten in their last 12 matches and the win pushed their record to 13-1-1 and 10-1-1 in conference.

A return match against Bloomfield on Monday was quite a bit closer, but the result was the same. Senior keeper Andre Lindsay turned away a penalty kick in the 86th minute to preserve a 4-3 win over Bloomfield in the CACC tournament quarterfinals. It was the first time all season Post had allowed more than a single goal in a game, but the Eagles keep marching on. They'll face Wilmington in the semifinals on Wednesday.

Last season, Cal State Stanislaus suffered a regular season-ending heartbreak against Sonoma State. History didn't repeat itself on Sunday, as Stanislaus marked down a 1-0 win over their California rivals to lock up the California Collegiate Athletic Association's North Division title. At 16-0-2 and 12-0-2 in conference (both of which are program-best marks), Stanislaus will be the No. 1 overall seed in the conference tournament this weekend.

The Warriors set a horde of program records in the process. They became the conference's first unbeaten team since 1998, won the most games in program history, went a perfect 11-0-0 at home and coach Gabriel Bolton snagged his 100th win in a 4-0 win over Cal State East Bay on Sunday. In addition, the team set program records for goals (48), assists (50) and points (148). The postseason can't get here soon enough for a Stanislaus team chomping at the bit to prove itself when it matters most.