Dunn, Brian impress with the USWNT

WASHINGTON — Despite recently starting the season, a handful of women’s college stars bolted to the nation’s capital for a mid-week friendly between the United States and Mexico at RFK Stadium.

It may not have been the most competitive of games as the USWNT cruised to a 7-0 win, but North Carolina’s do-everything star Crystal Dunn started the game, while rising Virginia phenom Morgan Brian came on as a sub, scoring her first goal with the national team in the process. 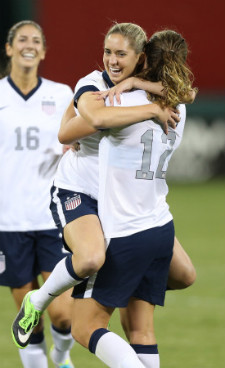 Brian celebrates her second half goal.

“Dunn impacts every game that’s she’s been in, every training session that she’s in,” he told reporters after the game. “And Morgan Brian showed tonight the real quality of her soccer. The quality of her play tonight was first class."

For the two players, the evening represented an opportunity to impress Sermanni in the midst of their college season. In a team with an established pecking order full of professionals ahead of them in the depth chart, chances only come by every so often, and need to be seized upon.

Deployed at a somewhat familiar right back spot Dunn put in a solid 56 minute performance, looking comfortable after a couple of hiccups in the game’s first ten minutes.

“It’s nothing new, I’ve played [right back] with the youth teams so it’s not really anything too new but it’s a different environment, I’m playing with the full team now instead of 20 year olds,” she said. “I’m learning each and every training session, and all the players have been helping me get a little bit better each time.”

Brian, who has enjoyed a strong start to her third year with the Cavaliers, came into the game in the 70th minute in a central midfield role, punctuating the appearance by scoring her first international goal two minutes into her shift. Finding space at the top of the box, her left-footed shot took a wicked deflection, spinning over Mexico goalkeeper Cecilia Santiago and into the back of the net, rounding out the 7-0 rout.

Not only was it her first international goal, but the Georgia native also had several familiar faces in the crowd to witness and celebrate the accomplishment.

“That was really, really special,” she said. “My parents are here, my old club coach and my UVA team. I’m actually really excited that I did get to score in this kind of a crowd."

Along with her goal, Brian was tidy on the ball in midfield, combining well with her older and more experienced teammates. It didn’t look like it was only her second ever cap with the full team, as Sermanni mentioned.

While the two enjoyed the outing, the evening belonged to Sydney Leroux. The former UCLA forward bagged a first-half hat trick in nine minutes that put the game comfortably out of reach, as the United State held a commanding 5-0 lead at the half. The ex-Bruin finished the game with four goals total.

“It’s typical Sydney Leroux,” Dunn said. “She’s by far the most aggressive, tenacious player that I know. Marking her in training is not very fun but she demonstrated her game tonight and it’s great for her. She pretty much put the team on her back.”

Also from the college ranks at RFK was Illinois midfielder Vanessa DiBernardo, who was an unused substitute for the United States. And on the other side, Mexico had a few Division I standouts in the starting lineup as well. Defenders Bianca Sierra (Auburn), Christina Murillo (Michigan) and Ari Romero (Nebraska) played the entire game at the back, while Santa Clara forward Sofia Huerta entered in the second half as a substitute.

For Brian, the hope is to take what she’s learned in this two-day whirlwind experience – the team held just one training session on Monday before the game –  and continue it down in Charlottesville, and ensure this isn't her last stop with the full team.

“This level is the best in the world right now and it will help with my college team going back and I can increase my speed of play and hopefully stay here,” she said.