While most men’s college players spent the summer competing against their peers, in various leagues like the PDL, one player in the college ranks tried to keep Brazilian superstar Neymar from scoring.

Fairfield goalkeeper Michael O’Keeffe started all three games at the London Olympics for his native New Zealand, going up against Egypt, Belarus, and the stars of Brazil’s silver medal squad.

The senior shot-stopper, who hails from Christchurch on the country’s South Island, was blown away by the experience. 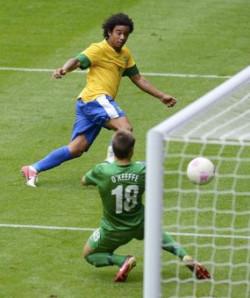 O'Keeffe at the Olympic Games

O’Keeffe has been a standout for the Stags all three seasons since joining as a freshmen before the 2009 season. He’s appeared in 54 games, and three times has been named an all-MAAC goalkeeper.

But heading into the Olympics, he was expected to hold onto a backup role behind Jake Gleeson, a goalkeeper for the Portland Timbers. However, Gleeson picked up an injury in a pre-Olympic match against South Korea, and O’Keeffe got the nod against Belarus.

“I knew I was up against it, obviously I didn’t want to go and sit on the bench,” he said. “I was trying to do my best to start… I just got the opportunity to start in the first game, and as we were monitoring Jake’s injury it didn’t really get better.”

After dropping the first game against Belarus 1-0, New Zealand drew 1-1 versus Egypt, giving them slim hopes of advancing past the group stage – but that would require to win against a star-studded Brazil side.

That would mean O’Keeffe would have to keep the likes of Neymar, Hulk and Alexandre Pato from scoring, quite the task. And although the All Whites ended up losing the match 3-0, O’Keeffe wasn’t overawed by the occasion.

“I didn’t want to get too overwhelmed by the nature of the players and the reputations they had,” he explained. “I just tried to keep my head down, we needed to win that last game so I was trying to do my best, didn’t really think about it too much.”

With the experience now in his past, O’Keeffe’s focus has now firmly shifted to helping the Stags make it further than they did in 2011. After winning the MAAC regular season and conference tournament, they led 2-0 into the final ten minutes against Ivy League foes Brown in the first round of the NCAA tournament.

But a collapse in the game’s final ten minutes meant that their tournament ride would come to a crashing end, as the Bears went on to win 3-2, with all three goals coming in that final stretch. That gives the team a lot of motivation as the 2012 season starts on August 31 against Columbia.

“Our first goal is to gel as soon as we can and try and win that MAAC championship again,” he said. “It would be great to go deeper into the NCAA tournament as well, and I suppose erase the memories of last year.”

And O’Keeffe is hopeful that he can add some of his Olympic experience to that quest. In particular, getting to play with Queens Park Rangers defender Ryan Nelsen was a particular highlight, as he was able to glean a great deal from the long time English Premier League defender.

“I learned so much from the whole experience and it’s just lots of little things that I hopefully can bring back to some of the young guys here at Fairfield,” he said. “[Nelsen’s] leadership qualities were amazing, really inspirational.”

Even though his focused is elsewhere, it was clear the impact the experience left on the Kiwi.

“Particularly with the Olympics being an age group tournament on the men’s side, it’s highly likely it’ll be a once in a lifetime experience,” he said. “It was mind-blowing to be part of team New Zealand, and New Zealand’s most successful Olympic campaign to date.”