While not all teams may crack the top 20 men’s recruiting rankings, that doesn’t mean that there’s a lack of talent coming in. Many schools have managed to bring in an interesting blend of talent. 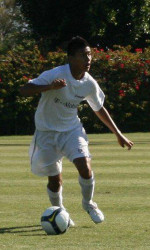 Here’s a look at five men’s programs that signed under the radar recruiting classes:

Washington: By adding some attacking weapons up front, the Huskies look poised to continue building on a successful 2012. The signings of both Steven Wright (San Juan SC) and Jose Ocampo (Crossfire Premier) bring in a pair of players ranked in the IMG Academy 150. Along with that pair, James Nosack (Portland Timbers) should bring firepower up front. Then there's a couple of players coming in truly under the radar, with the commitments of Cristian Roldan and Mason Robertson, both who come to the Huskies from outside the Development Academy and boast some very impressive resumes. In all, the 2013 recruiting class should add a significant amount of offense and goals to the upcoming season.

South Florida: Some very intriguing pieces are committed to South Florida for this fall, including Cameron Thomas, who happens to be spending his spring semester playing abroad in Germany. Two other offensive weapons who could turn this into a really special group are Lindo Mfeka (Indiana United Fire) and Marcus Epps (Chicago Fire).

Connecticut: A late change of committed has given UConn’s 2013 class a boost, with former U.S. U17 MNT player Ethan Decker switching from UNC to the stories Northeast program. Ray Reid is also turning his focus towards north of the border, and has picked up commitments from rising Canadian stars Cyle Larin, one of the nation’s best young strikers, and Kwame Awuah, an attacking winger who has good pace. Lorenz Esposito and Mark Richards are also solid additions.

Florida International: Many expected FIU head coach Kenny Arena would make a big splash with his first recruiting class, and he did not disappoint. Arena landed Nicholas Midttun (Boca Raton/Weston FC) and Marvin Hezel (SC Freiburg U19) for the spring semester - both of whom will have a good shot at playing time in the fall. FIU has eight others set to join those two from the 2013 class. Ismael Longo (Weston FC) and Vincent Reyes (LA Galaxy) are also going to be building blocks for the program’s future.

Cal Poly: The Mustangs grabbed a big name player in Los Angeles Galaxy winger Justin Dhillon, but they also added a few other potential difference makers as well. Striker Ariel Lassiter will add a valuable option off the bench with his speed. And the coaching staff is very high on striker Kaba Alkebulan from Sacramento United SC. The Mustangs went after offensive weapons in this class, and they look like they have found a few of them to help in 2013 and beyond.