Five MLS prospects who can use the combine 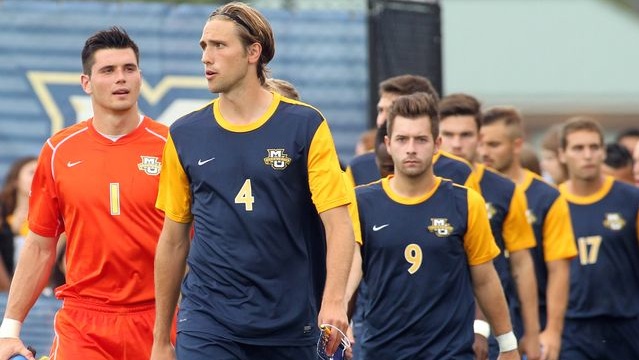 With the MLS SuperDraft less than a week away, the draft picture is gradually becoming less pixelated.

The combine, which runs from Jan. 8-13 in Fort Lauderdale, Florida, is an opportunity for a wider list of players to impress in an incubator, with dozens of eyes plastered to a series of games designed to showcase some of the draft’s guiding lights. As of Dec. 31, a group of 64 seniors were confirmed attendees. As to which of those can use the event to prove a point and increase their draft stock, here’s a look at a handful with quite the opportunity.

GK Spencer Richey, Washington: There was a time not so long ago that Richey would’ve been considered arguably the top goalkeeper in college soccer. Then Richey broke his leg early in the 2013 season. He missed the rest of that year and wasn’t quite up to the same pre-injury speed for much of 2014. Doubts about his ability to bounce back clearly persisted, considering Richey was a late addition to the combine list. At the same time, if an MLS team opts to take a flier on Richey, who has extensive YNT experience, in a keeper-rich year, they could end up with quite the steal. He’s a proactive netminder with quick-twitch reflexes, and on his day there’s still perhaps only one or two college keepers objectively better. The question is merely whether he can return to the form that once made him one of the most coveted keepers in the nation.

D Axel Sjoberg, Marquette: It’s hard not to be impressed just by looking at Sjoberg. He’s an impressive athletic specimen. At 6-foot-7, the massive Swede hardly has to jump to connect on a header, and on set pieces and corners he’s almost impossible to out-position. The problem’s his feet. As you might expect from such a lumbering presence, Sjoberg often has difficulty sliding into space, and college attacks often simply re-routed around him instead of trying to go over him. While Sjoberg almost never loses in the air, there’s something to be desired along the ground. That’s why this combine is crucial for Sjoberg. He needs to prove to MLS that he can track runners and move fluidly while also maintaining his ability to own the box aerially. If he can do that, he’s a surefire top 20 draft pick.

M Eric Bird, Virginia: Bird is an interesting draft case, in that you get the sense that MLS front offices aren’t quite sure what to think of him. Bird is a tremendous talent who can knit together attacks with the best of them. But his ideal position isn’t clear, and he played on a team that buttoned up at the back for much of his time and rarely opened up the throttle. That’s not to say that Bird wasn’t able to shine, but it does raise some questions. Further, he wasn’t 100 percent healthy over the stretch run of his senior season, so MLS clubs tuning in weren’t able to glean much from his performances. How dominant Bird can be - and how healthy he is - at the combine will firm up a draft case that could swing wildly up or down the board.

D Saad Abdul-Salaam, Akron: Anyone who watches Akron play with any regularity knows what to expect. Caleb Porter replacement Jared Embick’s carried on the possession-rich tradition, which includes a healthy dose of overlapping fullbacks bombing down the wings to whip in crosses and support the attack. Abdul-Salaam is the best Akron’s had in that role at right back since DeAndre Yedlin was roaming the field, and the comparison is closer than one might expect. Abdul-Salaam doesn’t have Yedlin’s quicks, but he’s a better crosser and a more intricate passer. His biggest adjustment will be tracking back, since the defensive demands of an MLS fullback are greater than a college one. Abdul-Salaam likes to spend a lot of time in the attacking third, so he’ll have to prove he can defend just as well. If he can show well in Fort Lauderdale, he won’t last long in the draft.

M Andrew Tusaazemajja, UCLA: Lob out the idea that a UCLA midfielder is attending the combine, and the No. 1 answer you’ll get will revolve around Leo Stolz, arguably the biggest name in college soccer right now. Which is fair. But Stolz isn’t the only Bruin midfielder in Fort Lauderdale. Tusaazemajja certainly isn’t the biggest name, and he was ninth on the team in minutes in 2014 with 1,120. But he was good enough to earn a couple starts for UCLA in the postseason, and he proved himself as a clean player who likes to play underneath the striker as a provider or a second striker. His biggest hurdle will simply be exposure. While UCLA was on a lot of radars (and you might’ve seen Tusaazemajja’s golazo on the Pac-12 Network this season), Tusaazemajja was often drowned out in a sea of big names. A positive showing at the combine will change that and force his name onto more draft boards.