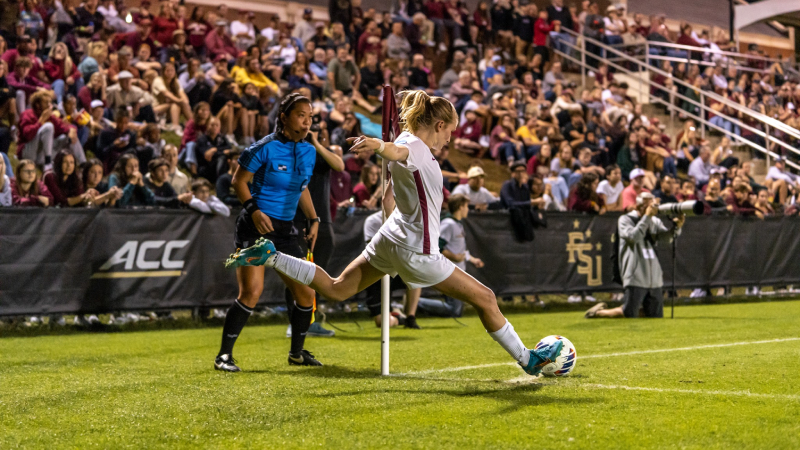 Senior midfielder Jenna Nighswonger booted the ball down field. Fellow senior LeiLanni Nesbeth chased after it. Sixth year graduate student Clara Robbins brushed an opponent aside. All the while, a coach with 25 years of college experience directed play from the sidelines.

And as the clock ran down in Florid State’s 1-0 win over Arkansas in the NCAA Tournament quarterfinal, its veteran team allowed itself a moment of celebration. And for most of the squad, it was a familiar mood. The Seminoles make for an experienced group, something they’ve leaned on to get this far. And ahead of the College Cup this weekend, they will be relying on those veteran heads to come together one last time.

“I'm lucky to be the coach of a group of kids who are very experienced at a high level,” head coach Brian Pensky said.

The Seminoles have some of the most experienced players in the College Cup — one of which will be playing in her fifth national semifinal. They are led by a veteran head coach, complemented by a seasoned staff. Among a fresh-faced final four — which includes a College Cup debutant — those extra years of tournament experience might just make a difference.

Florida State has made three College Cups in a row, and won two of the last five. And some players from that impressive run are still on the squad. Robbins was a regular fixture in the lineup back in the Seminoles’ 2018 title winning squad. Nighswonger and Heather Payne are set to appear in their third College Cup. And although Pensky was on a different sideline — overseeing a surging Tennessee team — he is no stranger to big games, either.

That veteran presence has served the Seminoles well so far this season. They are 17-2-3, and haven’t lost since October 20. They rarely look threatened, either. The Seminoles allow less than four shots on target per game, and have only conceded multiple goals on three times. Such a record is largely down to a well-drilled system composed of an experienced squad. Florida State only starts one freshman, and rarely dips into its bench for additional minutes. That age is evident in crucial positions. Cristina Roque, an All-Conference goalkeeper, has a college College Cup to her name. Nighswonger, the center of Florida State’s attack, has appeared in four final four matches. And Robbins, the anchor of everything, has been at the school since 2017.

Those three players have been crucial in recent weeks. Nighswonger has enjoyed her best year in a Florida State jersey, with 22 goal contributions to her name. Roque’s save percentage is now at .826, and she saved the game winning penalty to bounce Notre Dame from the ACC Tournament on November 3. Robbins, meanwhile, is as reliable as ever and posted an impressive performance as the Seminoles held off late pressure from Arkansas last weekend.

It was a showing that epitomized the Seminoles’ adaptability. Though the team has a recognizable style of play — incise passing with a utilization of pacey forwards — the management of moments of pressure has been crucial. And only with experience can those instances be navigated, Pensky said.

There is, in truth, more to the Seminoles than their average age. The roster features All-Conference and All-American talent. The Seminoles have playmakers, goalscorers and one of the nation’s best netminders. They have already beaten semifinal opponent North Carolina, and seem to match up well with both Alabama and UCLA — should either advance to Monday’s final.

Those other three teams, though, come into the weekend with fewer stops on the big stage. North Carolina hasn’t won a national championship since 2012. UCLA hasn’t claimed one since 2013. And Alabama is making its first College Cup appearance in history. So, in big matches, that extra edge, that extra age, could make all the difference.

“[Florida State’s] experience is going to allow them to show up and just play the game and hopefully within that, their soccer can be their best,” Pensky said.