BOCA RATON, Florida — In their two previous meetings this season, Virginia and Florida State already showed that little separated them.

Nothing changed in the third encounter with a national championship at stake.

One moment, one goal, was all Florida State needed to make its title breakthrough, defeating the Cavaliers 1-0 for the third time in 2014. 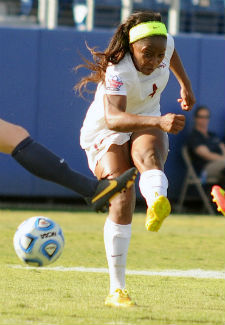 The winner came in the 83rd minute. Cheyna Williams drifted into space after collecting a poorly-struck goal kick, and found teammate Jamia Fields on the right side outside the Virginia box. Fields cut back on to her left foot, and slotted a low drive that beat goalkeeper Morgan Stearns and stood up as the game winner.

“We site here proud and pleased we were able to find the result against a great team, great program,” Florida State head coach Mark Krikorian said after the game. “They made it very difficult for us to break down. I wouldn’t say it was our most attractive game but at the end of the day, we did what we had to do to find the result. I’m proud of the effort, proud of the kids and happy to have the result in our favor.”

Scoring opportunities were scarce for long stretches, with the first shot on target registered in the 82nd minute of the game. Play was bogged down in a back-and-forth midfield battle for significant chunks of the day.

“They have great players all over the place and are very difficult to break down,” Krikorian said. “We knew coming into the game it’ll probably be a one goal game, and fortunately for us we have Miss November/December [Jamia Fields] down there.”

Half chances were all either side came across until the final flurry of action. Alexis Shaffer, inserted into the Virginia starting lineup as part of a tactical shift, volleyed a shot over the bar in the sixth minute from the top of the box. The Cavaliers forced a series of early corner kicks, but little came of them, aside from a Morgan Brian header that was well over the bar.

As the half wore on, Florida State forced its way into the game, harassing Virginia in possession and forcing turnovers close to goal. Megan Campbell’s long throw was the team’s most consistent threat to the Cavaliers back line, but neither side registered a shot on goal in the opening stanza.

Little changed after the break. A weak clearance bounced to Florida State midfielder Michaela Hahn at the top of the Virginia box in the 55th minute, but her first-time effort was well wide. Virginia forward Makenzy Doniak had a sniff at goal in the 66th minute through a nice bit of individual skill, controlling a Danielle Colaprico chip over a defender to create space, only to fire wide of the goal.

On the whole, Virginia struggled to fashion the same dangerous looks close to goal they created in Friday’s semifinal against Texas A&M, as the Seminole defense continued its tremendous form.

“I think they’re very committed to [defending] from front to back,” Virginia head coach Steve Swanson said. “I think even their forwards are good defenders. They press a lot more than they did maybe in previous years, they do that quite well. It’s together, it’s coordinated, it’s trying to minimize the field.”

As the minutes ticked off the clock, the pressure slowly built. Set pieces and long throws remained the only dangerous moments, although the Seminoles started to garner opportunities close to the Virginia frame.

Isabella Schmid fired a long free kick way over the goal in the 76th minute. Stearns was called into action for the first time in the 82nd minute, turning a low, well-struck Campbell free kick around her post.

But after the ensuing corner kick was knocked out off an FSU attacker, Stearns’ poor goal kick conceded possession right back to Williams, triggering the sequence which led to Fields’ winner a minute later.

“I feel like I’m in that position a lot,” Fields said about her winner. “The ball’s on my left foot when I cut inside and I just took the chance, shot it, and it went in.”

Time was running out on the Cavaliers, and Virginia pressed forward in search of an equalizer. They had a couple of half chances, none better than a rasping volley from Morgan Reuther in the 88th minute that went inches high of providing an equalizer.

“It was a tough game for us, not much separating us,” Swanson said. “We played them three times, and one goal games each time. I think you have to give them credit, we couldn’t get a goal against them in three times, I think that says it all right there.”