One of the highlights of another busy slate of action in the women’s soccer season was the beginning of ACC play. That drew a number of matchups of some of the nation’s best, and it produced the TopDrawerSoccer.com player of the week Kristin Grubka. 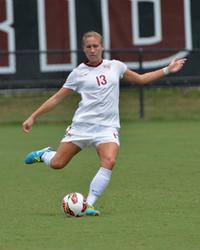 The Florida State center back was a big part of a successful trip for the Seminoles, who traveled to North Carolina for a pair of games. Highlighted by Grubka’s standout weekend, here is the team of the week.

GK Lauren Sestak, McNeese State: The netminder made a whopping 17 saves on Sunday, helping her side to a 0-0 draw on the road against a ranked Baylor Bears squad.

D Marissa Diggs, UCF: The senior center back played 180 minutes, guiding the Knights to a pair of shutout wins. UCF defeated Stetson 4-0 on Friday, following that up with a 2-0 defeat of Brown.

D Rachel Lenz, Texas A&M: The center back helped guide her team to two wins over the weekend, playing all but 13 minutes across the two games, a 3-1 win over Massachusetts and a 4-0 defeat of Cal Poly.

D Kristin Grubka, Florida State: It was quite the two-game shift on the road for Grubka, a defensive leader on the Seminoles. On Thursday, in the team’s ACC opener, she helped limit Wake Forest and their dynamic attack to zero goals in a scoreless draw. She followed that up on Sunday with a clutch goal, netting the game winner in a 2-1 defeat of Duke.

MF Morgan Andrews, Notre Dame: The freshman midfielder is back in the team of the week for the second straight week after her game-winning goal proved to be the difference in Notre Dame’s 1-0 upset against the Tar Heels. She continues to look calm, cool and collected in the Irish midfield despite playing against more experienced competition. Andrews also went 69 minutes in Thursday’s 3-1 win over NC State.

MF McKenzie Muchow, Butler: Her 90-minute shift in the midfield helped the Bulldogs to a shock 1-0 win over Michigan, as her 30th minute goal stood up as the game winner.

MF Daphne Corboz, Georgetown: She only played 38 minutes in an 8-0 win over Yale on Friday as she recovers from an injury, but Corboz still managed to score two goals and add three assists. The Hoyas remain undefeated with a perfect 7-0-0 record.

MF Jessie Ayers, Colorado College: While Ayers missed Friday’s action to kick off the weekend, the midfield maestro delivered a game-winning goal in the 59th minute of a rain-choked encounter with Texas. Colorado College picked up a much-needed 2-0 win to jump above .500.

F Arin Gilliland, Kentucky: The versatile forward/defender was up front for most of the weekend, and had a hand in all five goals Kentucky scored. In Friday’s 1-0 win over UTSA, Gilliland assisted on the game winner, and she followed that up on Sunday by scoring twice and adding two assists in a 4-2 defeat of West Virginia.

F Tabitha Tindell, Florida Gulf Coast(w): It was quite the road trip over the weekend for the Eagles, making the trip from Florida to Hawaii for a pair of games, and the freshman forward shook off the jet leg with little problem. After setting up the game-winning goal on Friday night, a 1-0 win over Portland State, Tindell scored four goals as the Eagles secured a 5-1 win over Idaho State.

F Kristen Hamilton, Denver: The experienced and talented forward drove the Pioneers to a 3-0 win against Colorado, scoring two goals and adding an assist in a 90 minute performance on Sunday.