Garcia, Morris impress at U20 scrimmage 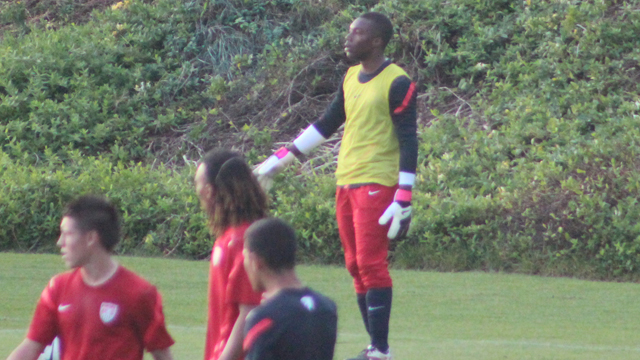 CARSON, California – The U.S. U20 Men’s National Team played an intersquad scrimmage on Wednesday where the Blue squad, which consistent of more likely starters for the World Cup team in a couple of months, emerged with a 4-2 victory.

Despite the appearance of a number of players who helped the U20 MNT to a runner-up finish in Puebla, Mexico at the CONCACAF Championship, it was one of the newcomers to the group and to the youth national team program that was the talk of the day.

Seattle Sounders U18 forward Jordan Morris contributed three assists during the 90-minute outing while showcasing a deft touch and an elusive bit of speed in open space. Morris started the game with the Red team where he assisted on both of the goals in the opening half. Midway through the second half, Morris switched to the Blue team where he provided the assist on the final goal of the game.

FC Dallas Academy product Danny Garcia also had a really good showing as the left winger pitched in with two goals including the opener of the game. Garcia finished off a chance in the opening minutes that goalkeeper Kendall McIntosh blocked into his path.

The Red team came storming back after the opener and had a couple of chances for the equalizer before Eric Miller finally put the ball in the back of the net. The movement started when Dillon Serna stole the ball off of Wil Trapp’s foot in the center of the pitch. Serna linked up with Colin Martin near the top of the box for a quick give-and-go.

However, Javan Torre made a last second sliding challenge to block Serna’s shot out for a corner kick. On the ensuing set piece, Serna delivered the ball to the far post that Morris headed back across the goal. Miller, crashing in on net, headed home.

The Red team gained the lead minutes later when Morris edged out DeAndre Yedlin in a foot race after Omar Salgado hit a through ball down the left side. With Yedlin on the ground after tripping up in Morris’ feet, the Sounders attacker picked up his head and spotted Alfred Koroma wide open on the far post. Koroma made easy work of the finish, which gave the Red squad the lead at the break.

The Blue squad gained control of the match in the second half and Chicago Fire Homegrown player Victor Pineda put the teams back on level terms. Benji Joya played a delightful through ball behind the Red squad’s defense that Pineda raced onto and then hammered past McIntosh into the net.

Substitute Kellyn Acosta netted the game-winning goal in the 75th minute when he quickly made his mark on the game from the center midfield position. Acosta nicked a sloppy pass and immediately put the defense on its heels. The FC Dallas Homegrown player dribbled past the final defender and then rounded the goalkeeper for the third goal of the game for the Blue side.

Five minutes later, Garcia capped the scoring thanks to an assist from Morris. Now playing as the target striker for the Blue team, Morris put his back to the goal and brought down a long ball before supplying a well weighted pass in front of Garcia’s run. The winger took one touch before tapping it over McIntosh for the final goal of the game.

Paul Arriola, Marky Delgado, and Ariel Lassiter all made appearances off the bench in the second half. Arriola nearly had a goal late in the proceedings when he pressured McIntosh while in possession.

Garcia was unlucky not to get a hat trick, as the North Carolina attacker had a shot hit off the post following a cross from Yedlin.

The U20 Men’s National Team returns to action on Sunday with a scrimmage against Chivas USA.