WASHINGTON — In the truncated schedule of the college soccer season, fostering an identity early on in a campaign goes a long way in dictating a team’s success.

For a program like the Georgetown women’s soccer team, it especially rings true in a season that began with a lot of questions to answer. While the team brought back midfield maestro Daphne Corboz and top goalkeeper Emma Newins, six starters graduated from a 2013 squad that posted a 16-3-2 record, exiting the NCAA Tournament against eventual national semifinalists Virginia. 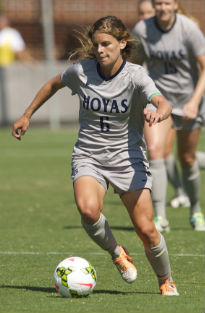 A team that likes to move the ball in attack and play through Corboz in the midfield, head coach Dave Nolan knew that the first few weeks of the season were critical. So far, the returns have been positive, with a 3-0-1 record, including an unbeaten road swing out west to open the campaign, a 6-0 win last Friday against ACC foes NC State and a 5-0 defeat of Towson.

Offensive success has triggered the unbeaten start. Despite being blanked in a 0-0 draw against Long Beach State, the rampant Georgetown attack has scored 14 times in four games. Six of those tallies came from senior forward Vanessa Skrumbis, who has nearly matched her goal output in 2013 and five different players have already scored.

Skrumbis, who made 20 appearances (nine starts) last season, is one of a handful of players to deliver and fill the spots opened up in the Hoya starting lineup.

“We lost a lot of seniors last year so everybody on the team wants to step up, and has been stepping up, and we need them to step up,” Corboz said. “So far we’re just trying to establish our style of play and we’ve been on the good side of a few results. It’s going well so far.”

Added Nolan: “We’ve never been a team over the last four or five years that has a problem scoring goals, and we seem to be able to get goals from a bunch of places.”

The opening weekend saw the Hoyas fly to California for games against San Diego and Long Beach State, showing Nolan that his team is able to cope with more athletic opposition.

“Every day we try and get better, and every day we challenge them to get better,” he said. “I learned a little bit out in San Diego that we were able to physically compete with a very strong San Diego team. I thought we did a good job of handling the heat and style of game and the Long Beach State game, which for the most part about 75 minutes we controlled and the last 15 minutes we got a little bit tired. That was a good weekend for us to come together as a group.”

One striking thing about the Hoyas is their approach to the attack. Instead of looking to lump long, diagonal balls toward their forwards, the play begins from the back, as defenders and midfielders pass and move, with Corboz a pivotal piece to unlocking the opposing back line.

That makes getting in sync in the attack as soon as possible critical, as players need to know each other’s tendencies on the field, where they’ll be and what they’ll do with the ball. If Georgetown can keep the ball and generate chances in that fashion, it bodes well for success in matchups against stronger, swifter foes – like they’ll face this weekend against a pair of ACC opponents.

On the other side of the ball, maintaining possession also helps the defense. Newins has conceded just one goal on the season so far, and opponents have launched just 16 shots on frame.

Later on this season Georgetown will look to knock Marquette off the perch of the Big East summit, while also holding off upstart DePaul. A big piece in this season’s success will also come down to Corboz, who already has four goals and five assist this season.

She’s obviously not alone in that respect. Along with Skrumbis, Corboz’s younger sister Rachel is a freshman who has started three games thus far and will also likely play a part in the offense. Nolan is hopeful that she’ll continue the recent tradition of talented attacking midfielders on the Hilltop.

“It’s fun to see the two together, they both have such a soccer IQ, it’s the first time they’ve had a chance to play together, they went to different high schools, so it’s fun for them, fun for their mom and dad in the stands to watch the game. We’re asking Rachel to play a different position, which is totally foreign to her, and she’s adjusting to that, but it’s been good.”

Said Daphne: “I love playing with Rachel, I’ve been waiting for this and I’m really excited. She’s such a good player, and she makes everybody else around her better.”

If the Georgetown offense keeps clicking and establishes that rhythm, the bright start to 2014 might just continue for the whole season.