Given the level of talent the Georgetown women’s team lost after 2011, it wouldn’t have been a shock to see the Hoyas struggling at this point in the season.

Ingrid Wells, Camille Trujillo, Samantha Baker and Kelly D’Ambrisi were amongst those who moved on, leaving plenty of holes to fill.

Instead of struggling in the face of that adversity, ahead of a very difficult two-game swing on the west coast against Stanford and Santa Clara, the Hoyas have won the first six games of the season. 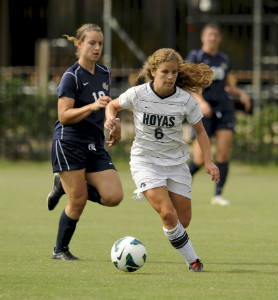 “They’ve surprised me,” head coach Dave Nolan told TopDrawerSoccer.com. “You always hope you’re going to be 6-0 – you’re going to hope you’ll be 20-0 – but we had some challenging games in there.

“It’s funny because every year you always sit down with your team and you kind of set out goals and you talk about benchmarks and so forth. We’re such a new team compared to last year in that we have eight people playing for the first time. And so with a brand new team, I never sat down with them, we never talked about – I wanted to see through this first part of the season what the team would become.”

Replacing players is all part of the college game, naturally, so it’s not like the Hoyas are alone in having to give new players time on the field. But the departed quartet scored 32 of the team’s 58 goals last year, meaning that the 2012 edition needed to re-invent itself a good bit.

And that’s exactly what Nolan has seen happen through these early days of the season.

“We’re a much different team than last year, in that last year we scored a heck of a lot of goals, but I wasn’t overly happy with the type of goals we were giving up,” he said. “This year, we’re the opposite. This year, we’re scoring some goals, but we’re far more solid in goal and at the back.”

Of course, there was no shortage of talent waiting in the wings to help replace players like Wells and D’Ambrisi. Daphne Corboz, a sophomore attacking midfielder who scored 10 goals in 2011, has walked right into a more prominent role, and already has 4 goals and 2 assists so far.

Leading the line is junior forward Kaitlin Brenn, whose 5 goals in the first six games is currently best on the team, as Brenn has assumed more responsibility. Junior defender Alexis St. Martin has excelled as a central defender after playing in different spots on the field in the past, while freshman Marina Paul has started from day one and been something of a surprise.

This weekend the resurgence is going to be put to the extreme test, as the team travels out to Palo Alto, California to take on Santa Clara on Friday and the defending champions Stanford.

“These two games this weekend are going to be the true benchmark, because you play against the defending champions and you play against one of the perennial powers in college soccer in Santa Clara,” Nolan said

Along with that, the Big East regular season schedule will also provide a stiff test, so the Hoyas aren’t about to rest on their laurels. The early season schedule has boosted the team’s confidence and instilled a strong sense of self-belief.

There’s no getting carried away either, and Nolan looks at this weekend continuing to take it one step at a time and try and sneak back to the East Coast with a couple more positive results.

“We go in there maybe with no pressure on us,” he said. “On any given day, anything can happen and you step out on the field knowing if you can limit the other team’s chances, you can always steal a goal yourself. We are confident we can go and play well.”