Greensboro, NC – The Carolina Dynamo allowed the West Virginia Chaos to stay close and wound up settling for a 3-3 draw. Carolina was the better team, but as I stated in my last article, if you don’t finish teams off, you’re going to get punished.

Carolina terrorized the left side of the West Virginia defense the entire evening, but they didn’t get enough production from these chances – with just a single goal from this exposure.

The Chaos scored an early goal. After 2 early second-half goals by Carolina, West Virginia fought back twice to get the draw.

West Virginia scrapped to get a point. I was shocked that West Virginia made no half-time adjustments on the left side of their defense that was problematic for the entire half. This continued for most of the game.

The first goal was scored by Rob Vincent (Charleston D2) in the 9th minute. The play started with Jamie Davies (Woods NAIA) crossing the ball to Richard Isberner (Rio Grande NAIA) 18 yards from goal on the near post. Isberner squared the ball across the box to Vincent who touched it back against the grain and curled the ball to the upper corner. It was a good shot. 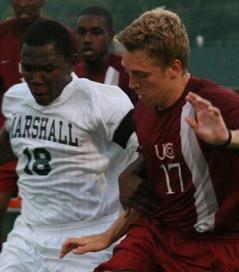 Rob Vincent (right)
The second goal was scored by Vincent on a penalty kick in the 70th minute. Carolina’s right back Fejiro Okiomah (High Point) pushed Dion Peters (Charleston D2) in the back - easy call. Sebastian Ibeagha and Okiomah arguing the call makes them look foolish. Vincent hit the shot low and to the right.

The final goal was scored by Peters in the 90th minute on a shot that took an odd bounce, seemingly changing direction and clearing goalkeeper Michael Chesler (High Point).

While Vincent had 2 goals, this was not a showcase game for him. His passing was inconsistent – too many turnovers. However, he was a consistent threat finding space at the top of the box. His timing for finding this space is exemplary. In the 60th minute, Vincent took a pass from Predrag Ivanovich (Jacksonville) and with an unbelievable degree of precision got the ball to Peters who touched the ball around his back but Peters hesitated on the shot and the opening was closed. Vincent likes to receive the ball via a square or cross on the far post. His first touch is generally back across the grain – from where the ball came from with the attempt to get around the first defender encroaching horizontally.

Chris Bohach was a disaster. The former Wingate star and current Marshall assistant coach couldn’t keep up with the play and he may have suffered from whiplash. By halftime, Fejiro Okiomah had Bohach running errands like a jailhouse minion. Bohach, it’s time to hang up the cleats. You’re no Ian Spooner.

On the other side of the back, Ivanovich is a solid defender.

While Marc Young (Rio Grande NAIA) steps up to intercept balls and plays hard defense, he is an immature young man. For example, he threw the ball at Robbie Lovejoy (North Carolina) when Lovejoy earned a foul outside the box in the 77th minute. Young could have been tossed for this action. Also, during the national anthem, Young couldn’t help chatting with his teammate and swaying – even if you’re not from America, please grow up.

Richard Johnson is a smart player. He sees the game quickly. In the 63rd minute, he went in low and hard against Lovejoy on a 50/50 ball. Johnson won the ball because he went in with more purpose.

David Eagan (King D2) is the more thuggish player to Johnson’s cleverness. Eagan isn’t a sensational technical player, but he gets the most out of his talent by dogged determination.

Peters was only called for being off-side 3 times. This is more indicative of Carolina running him on-side than anything that Peters conscientiously did.

Carolina makes many mistakes on both sides of the ball. They squander offensive opportunities and follow that with making silly mistakes. The last 2 goals (PK and the odd bounce) were from mistakes in the back.

Another thing that I noticed is that Carolina is slow on defensive transition. If West Virginia attacked quickly with purpose, they might have exposed Carolina. 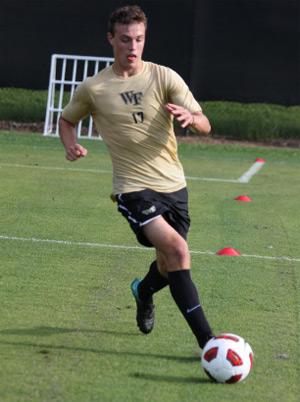 Andy Lubahn
The first goal was scored by Andy Lubahn (Wake Forest) in the 46th minute from a 19 yard free kick through the wall on the near post. The free kick was earned by Karo Okiomah (High Point) after beating Bohach on the dribble twice, Okiomah was tripped by Bohach.

The second goal was scored by Fejiro Okiomah (High Point) in the 55th minute. Okiomah as he had done several times, beat Bohach and then stepped around Luke Duffy (Lees-McRae D2) before straddling the end line and crushing a shot into the roof of the net from an impossible angle. Nice goal.

In the 85th minute, Martin Murphy blasted a 19 yard free-kick through the wall to the near post – sounds familiar just from the other side of the goal. Perhaps, West Virginia needs to find braver players to stand in the wall.

In this one game, Fejiro Okiomah demonstrated both why I think his future is both bright and difficult. His speed, confidence on the ball, and ability to get forward was terrifying to West Virginia. He was a threat the entire game. However, the foolish mistake giving up the penalty kick let West Virginia back in the game.

Fejiro’s brother Karo is going to have more difficulty in the professional environment. As a midfielder/forward, he’s a good athlete and he has good dribbling skills. Karo doesn’t run off the ball well and he makes many physical mistakes.

Donnie Smith (Charlotte) continues to struggle learning to play defense. Along the way, he seems to have lost his confidence on the ball. His crossing which has always been pretty good was erratic.

DM Nick Brindley is the key to the defense and is the key when the defense breaks down. Brindley gets sucked over to the ball side of the field. The problem is that creates a hole that Vincent gravitates into. Brindley either needs to direct one of the wide midfielders to cover the weak side or more likely demand one of the center midfielders (e.g., Sam Redmond – Wake Forest) to cover Vincent coming into the middle.

Andy Lubahn (Wake Forest) plays honestly, such as defending high. But, he needs to convert his opportunities. He’s a good player, but I’d like a higher conversion rate. Lubahn’s may only get 1 or 2 good chances in MLS. In the 10th minute, he headed a good Lovejoy cross wide of the goal.

In the 50th minute, West Virginia’s Richard Isberner pressured Sebastian Ibeagha (Duke) on his right shoulder, denying Ibeagha’s right foot. Ibeagha didn’t have the confidence in his left foot to either distribute or turn under pressure. Ibeagha was controlling the air in the back.

Freddy Gomez (Guilford D3) is good on the ball, but he lacks defensive intensity and desire.

Michael Chesler needs to lock in and make the stop on that third goal. He can’t let that shot get over him. He made a nice stop in the 75th minute, but allowed the rebound for a second shot.

Robbie Lovejoy (North Carolina) immediately tracks back when he loses the ball which I like, but Lovejoy had too many opportunities to show this proficiency. In the 11th minute, Lovejoy exploded from midfield to top of the box, but his shot was too close to the goalkeeper.
Headlines
College Rankings HQ
View all rankings >>