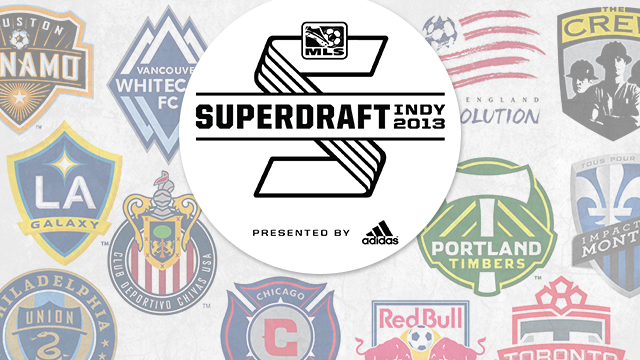 Knowing how successful an MLS draft will be always takes a few years as players adapt and adjust to a new level.

On Thursday, all 19 teams made their respective decisions, selecting 38 college stars of 2012 in the SuperDraft, in the hopes of adding something to their sqauds in 2013 and beyond.

Here are the grades:

Revolution get the man they want in Andrew Farrell who head coach Jay Heaps said had the versatility they were looking for in this draft. Farrell will be expected to step into the starting lineup immediately. Smith is a left-winger who likes to whip in crosses, who might shift to a left back spot. Spencer is a big body forward up front, though it's hard to know if he'll make the team, while Soffner's rise to prominence continues.

With their only pick of the draft, Chivas USA snatched up the player they wanted in Connecticut’s Carlos Alvarez. The technically gifted attacking midfielder could fit in well with the right system, but who knows what Chivas USA will trot out in 2013.

Toronto FC, sans head coach Ryan Nelson, was wheeling and dealing on Thursday, as the Canadian club dealt out of the No. 1 pick to start the day, ending up at No. 3 and No. 16. When the dust settled, the Reds ended up with two Canadian talents in Bekker and Welshman. Bekker is a center midfielder who is comparable to current TFC mid Luis Silva.

The Whitecaps draft strategy seemed to be select the fastest players and hope for the best. And in that sense, they got what they wanted for this draft. However, adding a young forward (Manneh is 18 years old) to a roster that already includes 2010 No. 1 overall pick Omar Salgado. Will there be enough time on the field for both of them to develop?

There were rumblings that Powers showed up to the combine overweight, which may have really worked to the Rapids favor on Thursday. The center midfielder from Notre Dame could be in for a big rookie season with the Rapids dealing away Jeff Larentowicz on Wednesday. Rapids used that pick to select Brown who is a quality prospect for a forward line that lost Omar Cummings in the offseason.

FC Dallas benefits from every club being fearful of Zimmerman’s injury, but he is a tremendous talent who should return to the field in the near future with full fitness. Hollingshead’s future in the game is uncertain, as the Pac-12 Player of the Year is currently building a church in Haiti.

A couple of the picks from the Impact were peculiar decisions, but the overall haul brings in a few solid players to a team that is trying to build a new identity. Smith is a quality winger who can defend just as well as he does attack. Monge is a disruptive midfielder with some versatility.

Columbus needed some speed up front and they add that with Ryan Finley who has a burst of pace, but they may have reached in taking the striker from Notre Dame. With Crew’s second pick, adding depth at right back was the priority and they picked up a serviceable prospect in Drew Beckie.

The question remains about where to play Zavaleta at the next level, as the Indiana star feature as a center forward in college but trained with Chivas USA over the summer at center back. Remick is a speedy left back, which should partner well with Homegrown signing DeAndre Yedlin who will lock down right back in the future.

The rebuild for RSL is in full effect, and head coach Jason Kreis decided to add some talent in the midfield with his first round pick. Stertzer has been a solid prospect at Maryland for the past few seasons. He will add some needed depth to the center midfield spot for RSL. Sandoval is a back to the goal type of forward who was very effective at the collegiate level.

Johnson, a Generation adidas forward, fell to Houston in the first round and Dom Kinnear obliged by selecting the Jamaican striker. He now has time to learn from Brian Ching, Omar Cummings and Will Bruin, affording Johnson the chance to come along at a bit slower pace. The team did arguably neglect more urgent needs in defense, but the addition of Nealis was also a smart pickup to address that.

When the top ranked prospect on the TopDrawerSoccer.com Big board falls into your lap at the 14th spot, it’s a no brainer. That and the Generation adidas contract make this a huge win for Sporting KC, which is certainly to face a cap crunch this year. Now it’s a question of developing Lopez within the team’s system and getting him at least some time on the field in 2013.

San Jose started the day by trading away a second round pick for Mike Fucito, then went out and selected two players to fill holes – Muller providing center back depth needed, while Dan Delgado is a shifty and creative attacking midfielder who offers an alternative to Rafael Baca.

Without a first round draft pick from the Kenny Cooper trade from last year, the Red Bulls did an extremely solid job with this pick, bringing in Christianson, a decent backup option for Dax McCarty in defensive midfield. Minutes will be hard to come by for the left-footed stalwart, but if he’s called upon he should be able to do a job for whomever New York hires as the coach.

Grading just one pick is no easy task, although D.C. gets knocked down a peg or two for the destination of its second round pick – a trade for Brazilian midfielder Fred, who ended up playing half a season for D.C. back in 2011. Kemp is an addition that does fill a need, an attacking left back with a great left foot. He’ll be a known commodity to United having played in their backyard the last four years.

It’s a stretch to come down hard on LA’s draft, and also just as much of a challenge to try and pick up solid players as MLS Cup champions picking last in the first round. Selecting Rugg with the final pick in the first round was a bit of a reach given his injury struggles in the fall of 2012, but he’s also a player in the similar mold – and much cheaper than Edson Buddle. Opare and Cochrane could both end up making the team and provide depth options along the back line.

Another team that decided to drop out of the first round, the Timbers were out of the draft entirely before trading back into the second round on Thursday morning. They turned that into Tucker-Gangnes, a center back with good height who thrives on set pieces. The only thing that makes one raise an eyebrow at this one is their declaration that they don't need any center backs earlier in the offseason.

Philadelphia, who traded away its first pick for top spot in the MLS allocation order to bring Bakary Soumare to the city of Brotherly Love can’t get much criticism for that move. However, selecting Anding with other more natural left sided options on the board is perplexing, as local kid Greg Cochrane would have been a better pickup. Stephen Okai is talented and a known quantity to the coaching staff after playing with Reading United last summer.

At first glance, the Emane pick is something of a head scratcher. But the youngster is a speed option who would compliment Patrick Nyaro and Colin Rolfe well. Throw in the fact that the Fire flipped its No. 11 pick plus some allocation money for Jeff Larentowicz and the grades go up.