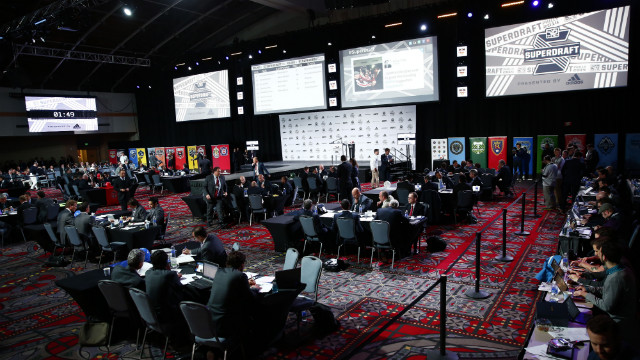 PHILADELPHIA, PA. — The first two rounds of the 2014 MLS SuperDraft occurred on Thursday in Philadelphia.

With those selections now in the books, TopDrawerSoccer.com hands out some grades for the franchises after the first 38 picks are complete.

Having just one pick on the day, the Fire filled a need and picked up a capable outside back in Franco. The UC Irvine standout looks the part and could contribute from the outset this season.

The Goats probably could’ve addressed needs elsewhere on the roster with this pick. And while McNamara was one of the more intriguing players on the board, they could’ve picked up a center back or a player more likely to make a difference for them in 2014.

Colorado netted a rather impressive haul. Hairston will need time to develop, though Van De Casteele provides a defensive option at the back. Watts has sleeper potential, while Berner will have a chance to claim a roster spot in preseason.

Sweat is an impressive prospect and the top left back in the draft class, but it wasn’t necessarily a huge need for the Crew.

United got the player that they wanted, plus netted some allocation money in the trade with the Union. Birnbaum can make an impact in 2014, while Munoz is a crafty and technical player who will need to prove he can influence games in MLS.

It seemed like something of a reach for FCD to grab a Division II player with the sixth overall pick of the draft. However, FCD acquired an international slot and was able to acquire the player it coveted after trading down and then back up in the draft.

Getting a Generation adidas contract at the 16th spot is a definitely win for any club, and the Dynamo added another center back to the stable with the selection of Cochran. Sherrod is a big striker that could make the team, translating into a pretty good day for the Dynamo.

Depth at the back isn’t necessarily a huge need, as this pick was definitely the case of grabbing the best player available. It will be interesting to see if Venter can get playing time this season in MLS.

Trading up to grab Miller -- a right back -- when center back seems like the bigger need for the Impact subtracts from this pick. However, Miller did play there during his career at Creighton(m) and might get a look in the middle.

The Revs managed to grab the two top senior attackers available in the draft. Whether or not that pans out for them remains to be seen, but the pair could thrive in New England’s system. Sundly missed the combine and adds depth in defensive midfield.

Duvall could very well work out for the Red Bulls, who are in dire need of a right back. Stevenson could offer a creative option if he can battle through injury issues.

Philly kicked off the draft in style, flipping picks with D.C. United and grabbing Andre Blake, the top prospect in the draft. The day only got better when Ribeiro fell into their laps, Cope, a solid center back and then grabbed a potential left back in Robbie Derschang.

Grabbing Tshuma was a low risk, high reward move for Portland, as he’s a GA player who can be groomed into the team’s system. Peay isn’t exactly renowned for his ability on the ball, but he’s athletic enough and has the ability to cope at the next level. Long obviously faces long odds of making the roster.

With just the single pick on the day, RSL snapped up an outside back depth option who will compete for a roster spot and if he makes the squad, could bolster that team’s spot on the field. Making the team could be tricky, of course, because RSL already has 27 players under contract.

A standout center mid at Stanford, Koval provides depth at a needed spot for the Earthquakes. Sofia, who wasn’t invited to the combine, must prove he has the pace to keep up in the league.

Surely the Sounders could’ve added a better center back or two then the pair they landed. Lowe seems like a bit of a reach at the eighth spot, while Ockford was picked while Kyle Venter was still available.

A speedy forward that player mostly as a reserve at the college level, Gabeljic seems like an intriguing add to Sporting KC’s style of play. He’ll likely project more as a winger.

Picking a defender seemed like a no brainer for Toronto FC, a team in need of defensive depth ahead of this draft. Trading up to grab Hagglund may have been a bit of a stretch. Lovitz will face an uphill battle to make the team.

Diouf in the second round represents a solid pick for the Whitecaps, which will need to fill some attacking options with the expected loss of Camilo. Dean and Lewis are both projects who will need time.