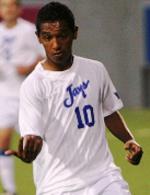 Quantifying anything in relation to the MAC Hermann Trophy is difficult, as the award in its essence remains prestigious but mysterious.

To explain the mistfying part about the Hermann Trophy selection, imagine college football’s Heisman Trophy vote when only one per cent of the games were broadcast on national television. Add to that the polarizing nature of how to rate college soccer players of different positions, conferences, and parts of the country and that roughly explains why there is rarely a runaway winner with the trophy.

While Indiana and Georgetown fans chide about the disrespect shown to Eriq Zavaleta and Steve Neumann for not making the list of the final three, there is still a compelling story to the three finalists that were selected this season.

Creighton’s Jose Gomez, Maryland’s Patrick Mullins, and Notre Dame’s Ryan Finley represent the varying degrees in how one defines a player’s contributions to a team’s success. The three also carry the torch for different historic reasons in what it would mean for each to lift the bronze statue.

Gomez, the 2012 TopDrawerSoccer.com Player of the Year, is hoping to become only the second player from Creighton to lift the trophy. Sixteen years ago, Johnny Torres became the first (and as of now, the only) Bluejay to win the award, which capped off a stellar career for the forward and current assistant coach.

Yet, Gomez does not have the same numbers that Torres had all those years ago and that many other players since then have had to champion their campaigns for the illustrious award. With only six goals and nine assists in his final collegiate season, Gomez’s statistics do not have that everlasting impression.

Even though the College Cup appearance will bolster his squad’s perception, Gomez still hails from a smaller conference than the other two finalists. As the MVP of the Missouri Valley Conference, he does have something on the mantle, but it might be difficult to overcome against the MVPs of the Atlantic Coast Conference and Big East in the eyes of some voters (but again, his team was in the College Cup and most others weren’t).

Like Gomez, Mullins is, surprisingly, attempting to become only the second MAC Hermann Trophy winner in his school’s history. Maryland great Jason Garey claimed the award first in 2005 as a senior. Mullins is only a junior, which may work against him compared to the other two finalists.

Holding the ACC Player of the Year will be a major plus, as Mullins is following in the steps of a handful of previous trophy-holders including last season’s Hermann Trophy winner Andrew Wenger.

Finley’s historic claim is a bit different. While Finley would also be only the second Notre Dame player to ever lift the award, he would become the first player to transfer between four-year universities and win the award.

Clemson’s Wojtek Krakowiak accomplished the feat in 1998 after he transferred from St. John’s, but he did so prior to the player of the year awards being combined and shared the honors for the year with Duke’s Jay Heaps and Indiana’s Dema Kovalenko as well.

Adding more to Finley’s historical significance, he would be the first player utilized as a supersub (a player who appears off the bench) to capture the award. The striker finished the season with 21 goals and four assists, but did not start a single game in his senior campaign.

On January 11, the significance historically or otherwise will be an afterthought though when one of these three players lifts the trophy based off merit and accomplishments for the 2012 season.