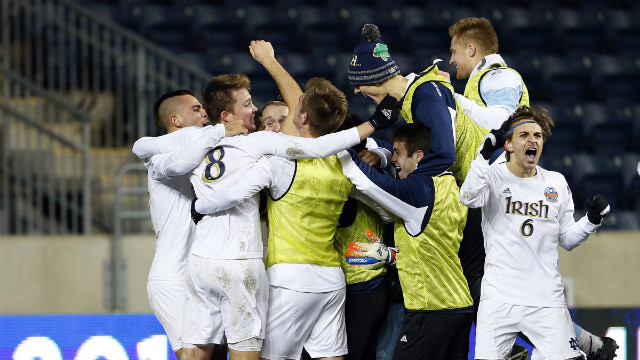 It was only fitting then for two seniors to connect on the winning goal that brought the Irish its first men's soccer national championship, writing itself into the program’s history books. 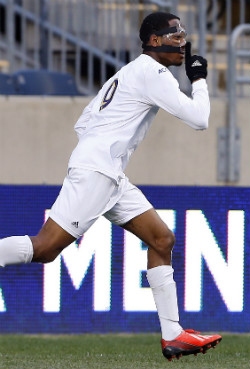 “It’s unbelievable,” Clark said. “This is right up there with any championship I’ve ever won.”

The game took on all the typical traits of a title game between two evenly matched opponents: direct, physical play, with each side looking to send crosses in from the flanks and find open players in the box. It would also feature its share of controversial moments.

The first moment of danger came from the foot of Shipp in the 11th minute. Pirouetting free from a Maryland defender, his low, bending drive was turned past the post by goalkeeper Zackary Steffen.

The controversy arrived in the 35th minute, when Maryland took the lead during a crazy sequence. Alex Shinsky fired a corner kick on frame, and Irish midfielder Patrick Hodan moved to the left and cleared the ball off the line with what appeared to be his left arm. However, referee Hilario Grajeda made no signal as the Terps protested what could have been a penalty kick and red card for the midfielder.

Senior forward Patrick Mullins, who admitted to controlling the rebound with his hand after the game, lashed home the bounding ball to open the scoring.

Added Hodan about his block: “It  wasn't anything deliberate, it was just kind of a reaction. It was closer to the shoulder, I’d like to say. They ended up scoring anyway, so it wasn’t too big of a deal.”

It didn’t take long for the Irish to equalize after the hectic opening goal. Nick Besler flicked on a Luke Mishu throw-in outside the six-yard box, and onto the feet of forward Leon Brown. The attacker took advantage of a slip by center back Chris Odoi-Atsem, finishing under Steffen to tie it at 1-1 in the 40th minute.

Shinksy had another opportunity in the 41st minute when a Jereme Raley cross found him unmarked in front of goal, though the midfielder’s headed shot was an easy save for goalkeeper Patrick Wall.

After more back-and-forth play to start the second half, O’Malley delivered the go-ahead goal in the 60th minute from a set piece. It was a simple connection between the center back and Shipp, as the midfielder’s curling set piece delivery found the defender, who glanced the ball past Steffen to take the lead.

“The goal itself was really put up on a silver platter for me,” O’Malley said after the game. “It would have been really tough to screw it up, I suppose. Harry [Shipp] played just a beautiful ball and all I had to do was re-direct it to the back post.”

Said Clark of the goal: “He missed a few all season, I can tell you, but he saved that goal for the right time. It was a great goal."

The Terps started throwing numbers forward, and had another handball shout turned down in the 67th minute, when a bouncing ball made contact with Irish midfielder Conor Klekota’s hand from a corner kick. Grajada was again unmoved.

All season long the Irish defense had been one of the best groups in the nation, and central defenders O’Malley and Grant Van De Casteele ably held off the Terp attack over the game’s final 30 minutes to cue the celebration.

“It was a great win for us against a very good team, and it finishes off the season very nicely for us,” Clark said.