Xavier battled Notre Dame on Saturday night for a good cause, as the two teams squared off in the second Annual Down Syndrome Awareness Classic. The Xavier Musketeers looked to close out a difficult spring schedule with a win against one of the top teams in the Midwest. 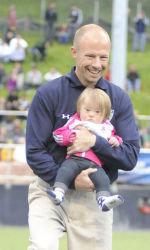 Xavier Head coach Andy
Fleming and his daughter
Devin who has Down
syndrome.

The Notre Dame Fighting Irish appeared to have dug themselves a deep hole in the first half, giving up two Xavier goals. The early lead for the Musketeers came after finishes from Andrew Jordan and Will Walker.

Xavier’s first goal came off a corner kick play in the 12th minute when Jordan played the ball into Gino De Paoli, who quickly touched the ball back to Jordan. Jordan made quick work of the rest of the play and struck the ball from 25 yards out; delivering a brilliant strike that beat the keeper in the upper left corner.

The Musketeers did not sit on the one goal lead and immediately looked to add another tally to the score sheet. Seven minutes later, in the 19th minute, Jordan found himself involved in another scoring opportunity for Xavier. After beating his defender out wide, Jordan played a ball back centrally where Matt Walker dummied the ball for his waiting brother Will Walker.  Will found himself with plenty of space and time about 20 yards out from the goal. Without hesitation Will finished the slotted ball low past the diving Notre Dame keeper, Adam LaPlaca.

Even though everything looked to be going Xavier’s way, the Fighting Irish weren’t ready to throw in the towel yet. Just three minutes after the Musketeer’s second goal Notre Dame was in the attacking third, pushing for a goal. A Notre Dame cross was blocked by a Xavier defender and the referee pointed to the penalty spot, signaling a handball. Notre Dame forward Harrison Shipp stepped up to take the penalty, but Xavier keeper Eric Osswald read Shipp the whole way and made a brilliant save low to his right side.

Both Xavier and Notre Dame continued to trade scoring opportunities in the first half, with the Musketeers dominating the chances. With just five minutes left in the half, Notre Dame defender Max Lachowecki played a cross into the Xavier box that found midfielder Kyle Craft, who elevated himself for a brilliant onetime strike that found the upper 90.

“Anytime you get a goal back in the first half, it helps. That was a brilliant strike for us and I don’t think we ever felt panicked. We would have liked to finish the penalty but sometimes that doesn’t happen and you keep pushing for a goal”, Notre Dame head coach Bobby Clark said.

At halftime Xavier had outshot Notre Dame 8-7 and held the lead 2-1.

The game could be described as a “tale of two halves” as the Notre Dame Fighting Irish came out of halftime with a completely new lineup and a new determination.

The Fighting Irish found the equalizing goal just five minutes into the half when Luke Mishu finished the rebound effort from teammate Alex Priede’s powerful shot. Priede had beaten his defender and rifled off a shot near the six, which Xavier keeper Osswald pushed away. Unfortunately for the Musketeers Mishu was crashing in on the far post and had the deflected shot fall right into his stride for an easy finish.

Xavier looked to be on their heels as they attempted to keep up with the speed of Notre Dame’s fresh-legged attackers. Fighting Irish midfielder Patrick Hodan looked to exploit the tired Xavier back line and made a blistering run with the ball through two defenders before driving at the keeper on the end line. After drawing out the keeper, Hodan expertly slotted a ball to the top of the six where teammate Evan Panken was waiting for the easy finish.

The Fighting Irish took the lead and never looked back. Notre Dame would pick up two more goals; one from Priede and one from Leon Brown. The Irish limited Xavier to just three shots in the second half, and only one was on frame.

After the 5-2 defeat Xavier head coach Andy Fleming talked about what the night meant to him and his family.

“When I came to Xavier three years ago the goal was to get that hill (across the field) as full as it was tonight. The fact that we set an attendance record for such a great cause is even better. If just one person who was here tonight looks at someone with a disability differently, then tonight was a success," Fleming said.

Fleming’s daughter Devin has Down Syndrome and was recognized as the honorary captain for the match. She began the game with a ceremonial kick-off and was then joined on the field by both team’s starters as well as other children with Down Syndrome.

The match set a single-game record with a crowd of 1,256 in attendance, many of them participants in this weekend’s adidas Men’s Blue Chip Showcase. More than $3,000 dollars was collected to be donated to the Down Syndrome Association of Greater Cincinnati.