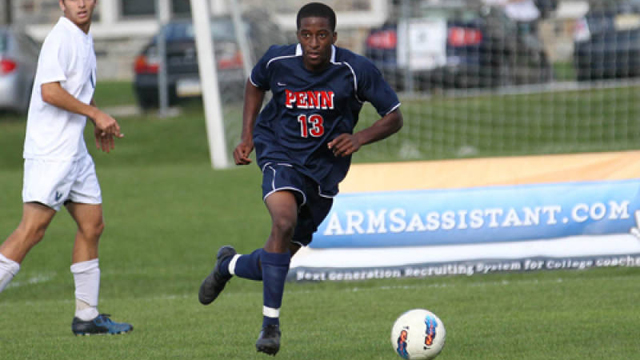 The 2013 Ivy League Champions came very close to carrying the scholarly banner into the second round of the NCAA Tournament last fall. A 3-1 loss in penalty kicks to Providence capped the season for the Quakers in late November. It was the league’s story of the year, though. Penn played a tough schedule and dropped eight games, but only one loss came from more than a one goal deficit. The good news for Penn is the return of 2013 Ivy League Offensive Player of the Year Duke Lacroix for his senior campaign. The bad news is five starters are gone from last year’s squad. Head coach Rudy Fuller will need to fill those vacancies for Penn to stay atop the Ivy pile.

Harvard benefits from a strong returning class in 2014 in its bid to capture the conference crown. Leading point scorers Ross Friedman and Kevin Harrington are gone, but forwards Michael Klain and Daniel Smith are back for their junior and sophomore seasons respectively. Harvard also looked to California to fill in some of the spots for this season with four freshmen from the Golden State. Head coach Pieter Lehrer’s history with the California staff certainly helped with his recruiting efforts. He also showed last season that he isn’t shy about playing the new guys.

In the preseason preview, Princeton head coach Jim Barlow highlighted the out-of-conference schedule for his squad as he hopes to generate the necessary wins to attract a possible at-large bid. There’s a daunting slate of games ahead that includes a clash against Georgetown. The Tigers are relying on the four returners who made all-Ivy League teams last season. Center back Josh Miller is the standout from the group, and he’s one of the captains of the team in his junior campaign. Princeton will also lean on the newcomers with six talented freshmen on the books for 2014.

Tariq Akeel had an outstanding sophomore campaign for the Brown Bears in 2013. The midfielder finished with six goals and three assists in 17 appearances. He headlines three returners for Brown who made all-Ivy League last season. Defenders Daniel Taylor and Alex Markes were also honored last season and are back for another go at an Ivy League crown. The Bears’ biggest question mark for the season is in goal where Erik Hanson, Mitch Kupstas, and Joey Cipicchio will all be battling for the starting spot.

Yale had trouble getting out of the starting gates last season. The Bulldogs lost seven of their first 10 games of the season. A 1-4-2 record to cap the season wasn’t much better but there were glimmers of hope. Forward Cameron Kirdzik scored four goals in his debut campaign. Midfielder Henry Albrecht led the team with four assists in 16 appearances. However, the Bulldogs need to replace five consistent starters from last year’s team.

Can the Big Red replace Patrick Slogic? That remains the question heading into 2014. The Ivy League Defender of the Year was the cornerstone of the program for the last few years and now Cornell moves on without him. Cornell went in heavy on freshmen in the off-season with 12 listed on the roster for this fall. An out-of-conference schedule with road games against Louisville and Syracuse will definitely test the squad early in the season.

Columbia, on paper, looks like the sleeper pick of the Ivy League. The coaching staff has done a commendable job in acquiring exciting talent to fill in attacking positions. Former Development Academy standout Nicholas Pappacena scored three goals in his debut season with the Lions. It wouldn’t be unrealistic to see him double that output in 2014. Pappacena will have some help this season as well as fellow Development Academy star Arthur Bosua joins the program.

Chad Riley enters his second year as head coach of the Big Green. His squad’s out-of-conference performance in 2013 was admirable, but the Ivy League slate left his group with more bruises than smiles. Riley, undeterred, scheduled a challenging out-of-conference schedule for 2014. There is a long list of players who will need to step up for Dartmouth to climb out of the cellar. Keep an eye on freshman midfielder Matt Danilack who could be an immediate difference maker in the Ivy League after a stellar season with Bethesda-Olney.