CARSON, California — Sometimes the hardest lessons are the one learned through defeat. 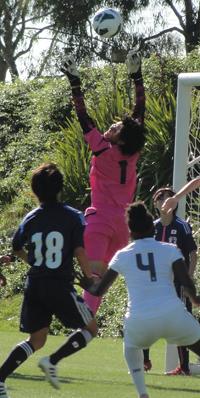 The U.S. U20 Women’s National Team is certainly hoping that adage rings true after dropping a 3-2 friendly to Japan on Thursday at the National Training Center. Andi Sullivan and Miranda Freeman scored for the U.S., which both came on corner kicks by Rose Lavelle, but it was Japan who had the run of play for the majority of the outing as well as the three points at the end.

“I think the first 20 minutes of each half, we were just as good, if not better, than they were,” U.S. U20 WNT head coach Michelle French told TopDrawerSoccer.com after the game. “As we tired and lost a little bit of our energy – because it is toward the end of camp – they are so good technically and their movement of ball is so hard to track. If you are fatigued, it is really hard to play against them.”

Japan opened the scoring after 28 minutes when Mina Tanaka caught U.S. goalkeeper Katelyn Rowland off her line and punished her with a laser to the top corner of the net from 28 yards out. The opening goal was the only time Tanaka’s name showed up on the score sheet on the day, but she was a difference maker from the first whistle to the last. The visitor’s striker presented headaches for the U.S. defense with her constant movement and sneaky ability to place her body in front of a defender to draw a foul in dangerous spots.

Japan doubled the lead right before half when a cross to the far post was awkwardly handled by center midfielder-turned-left back Sullivan. Yuka Momiki pounced on Sullivan’s touch and then placed her shot in the far corner of the net with a beautiful curling effort that left Rowland helpless.

Despite two goals conceded, Rowland was key for the U.S. in the opening half, as the UCLA keeper made six saves including a brilliant diving stop on a free kick from 20 yards out.

The U.S. changed its approach in the second half and took the game to Japan thanks to some energy brought from halftime substitutes Freeman, Amber Munerlyn, and Kayla Mills.

“Really pleased with the response in the beginning of the second half to press them like we did and get back two goals,” French said. “Unfortunately, we got caught with some amazing movement behind the back line to give up that third one.”

U.S. put its first goal on the board one minute into the second half when Sunshine Sullivan soared up in the clouds and headed home a corner kick by Lavelle.

Six minutes later, Lavelle provided another gem on a silver platter that fell into Freeman’s lap. The USC center back volleyed it toward net, which appeared to hit off Margaret Purce before crossing the line. U.S. Soccer awarded the goal to Freeman though.

The domination from the home team did not stop with the second goal though. Sullivan had a shot from 25 yards out that was a good look but goalkeeper Nene Inoue blocked the initial charge and scooped up the rebound before any forwards could poach on the ball.

The U.S. had four shots on goal in the opening 10 minutes of the second half. However, Japan adjusted and regained composure through the midfield. The harmony and pace to Japan’s movement made all the difference on the day, as the Japanese seemed at ease picking up the ball in between the lines of U.S. defenders.

The third goal was an illustration of it. Japan opened up the U.S. defense down the left channel and then waited patiently for a cutting run to supply the final pass and a nice finish from 10 yards out. Substitute Yu Nakasato put her name on the goal, but it was a team goal from start to finish in all respects.

Japan saw out the final 20 minutes of the game with possession and a stifling amount of pressure that at times frustrated the U.S. squad.

The Americans will have a chance to bounce back on Sunday when the two teams meet again at the National Training Center at noon. Admission and parking are free.