Faced with the daunting challenge of defending a national title in the fall, the UCLA women’s soccer team had the chance to face some of the world’s best players this spring.

During its spring break at the end of March, the reigning champions traveled to Japan for a 10-day trip, which featured a combination of soccer and sightseeing. It gave them the opportunity to be tested against elite competition, sharpening their skills for a run later this year. 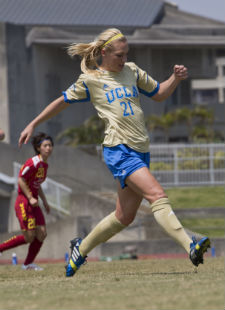 The trip came together when the team was invited to play Japanese club team INAC Kobe Leonessa FC, one that features seven players from the 2011 Women’s World Cup winning side.

“It was awesome,” head coach Amanda Cromwell told TopDrawerSoccer.com of the trip. “We got to experience three different cities, play two tremendous Japanese teams and learn a little of their culture and have a good time off the field as well. It was one of those trips that as far as the full experience of what you want it to be like, it covered just about everything.”

The journey was also a whirlwind. The team began its trip on the Japanese island of Okinawa, where it lost 3-2 against INAC, the reigning league champions who boast the legendary Homare Sawa.

From there, the Bruins traveled to the Japanese mainland, heading to Shizouka, the current home of the Japanese Football Academy. There, they beat a squad of youth national team players 2-1, before wrapping up the trip with some sightseeing in Tokyo.

From a playing perspective, the coaching staff had a clear goal in mind.

“We really wanted to use it to learn the Japanese style of play, which is so good,” Cromwell explained. “[INAC] really exposed us in ways that not really many teams in Division I college soccer can… we’re not going to get that level of play against anyone we can play in college. So we got the video of the game and broke it down, we really wanted to use it for a couple reasons: one, to see how they exposed and how we can be better and also to see what we can take from their game and implement it into our game.”

Cromwell is no stranger to Sawa or the way Japanese teams like to play – she was Sawa’s teammate on the Atlanta Beat, a team in the old Women’s United Soccer Association – was impressed nonetheless when she saw the approach up close.

“They all read each other’s movements so well, all these three-man combinations going forward, it’s not just A-to-B, not easy to read, not predictable,” she said. “They have runners coming out of the midfield that end up on the ball, a lot of the American players aren’t seeing those runs or playing those balls because the runs aren’t there. That’s the big thing, how they throw numbers into the attack but it’s not chaotic runs, it’s precision attacking with numbers. It’s a sight to see, really.”

The rest of the fall has been an interesting challenge for Cromwell. Because of the team’s success, several players have earned looks with various national teams: Samantha Mewis and Sarah Killion with the full women’s side, Darian Jenkins and Katelyn Rowland with the Under 20s have all spent time away, while Rosie White has played for New Zealand’s full team.

Considering it’s the spring, it hasn’t necessarily been a bad thing, as Cromwell has gotten to dig deeper into her bench.

“It’s been a really good time for the reserves and the players who haven’t played as much to get a chance to get on the field and show me how they can potentially make an impact,” she said. “Some players have really stepped up, we’ve got some players back from injury, that’s been encouraging to see them in the mix.”

This past weekend the Bruins topped the U20 WNT by a 2-1 score in Chula Vista, and will wrap up the spring slate this weekend against the LA Blues. April has been busy in particular, but Cromwell has enjoyed the way things have come together as the team gears up for a title defense.

“We’ve had a pretty full schedule, the whole month of April is going to be like a season, every weekend we have a game,” she said. “It’s nice, kind of prepare and get them ready for the fall.”