Brooke Elby gave it her all on Saturday.

The often utilized but rarely featured sophomore from North Carolina found her name in the lights after sprinting 60 yards on sheer determination and saving the season for the Tar Heels.

BYU hit North Carolina on the counter attack five minutes into the first overtime period. Cougars forward Carlee Payne Holmoe played a splendid ball through to Lindsi Lisonbee Cutshall who cut past the keeper and had an open net to win it.

However, Elby’s lengthy sprint at full speed from well past the midfield line put her in the only position in the stadium to save Cutshall’s effort. The midfielder from California slid at the last second and managed to block the shot out for a corner kick. 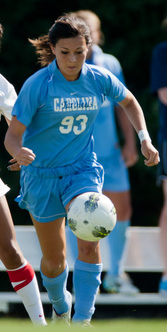 “She saved us,” Anson Dorrance said in the postgame press conference about Elby. “[Cutshall] is an extraordinary player and we dodged a bullet. This is a terrifying game to coach.”

U.S. U20 women’s national team defender Crystal Dunn scored the winning goal midway through the second overtime period, her second of the game. Dunn’s efforts earned her the TopDrawerSoccer.com Player of the Week honor. Kealia Ohai and Alyssa Rich combined for the assist in the 2-1 victory in front of a lively 4291 fans in Provo.

The Tar Heels move onto their 26th College Cup with a tilt against Stanford looming. Remarkably, North Carolina has won the NCAA Tournament Championship in 20 of its previous 25 appearances in the Final Four.

“It is a dream come true going to another College Cup,” Lo’eau LaBonta

The upcoming opponent for North Carolina gained its berth with a come-from-behind victory over UCLA on Saturday. Stanford sophomore Lo’eau Labonta scored twice in the 2-1 for the Pac-12 Champions.

UCLA was once again left with an empty feeling after taking the lead, but not being able to hold off the Cardinal at the end.

“It was a great spectacle for the sport, really, because there was some real quality soccer played both ways,” UCLA coach B.J. Snow said in the postgame press conference. “But it hurts, it hurts a lot.”

The Cardinal’s senior class finished their career at home with a nearly perfect 52-0-1 record and now moves on in hopes of winning back-to-back National Championships.

“It is not my favorite thing,” Christine Nairn about penalty kicks.

Penn State senior Christine Nairn put away her nervous jitters and the lone goal of the game via a penalty kick on Saturday in a 1-0 win over Duke.

Head coach Erica Walsh is headed to her first College Cup in her sixth season as the leader of the Big Ten program.

The Nittany Lions battled tough conditions and a very talented Duke side, which returned all 11 starters from last season’s NCAA Finalist team, to earn its spot. Its upcoming opposition also faced a similarly difficult path to San Diego.

“Probably would’ve put a couple more years back on my life if that went in,” Mark Krikorian.

Florida State head coach Mark Krikorian joked after the game about the close chances for his squad in a 1-0 win over Notre Dame in the NCAA Quarterfinal.

Ultimately, Tiffany McCarty provided the winning tally with a volley after a long throw-in early in the second half. Goalkeeper Kelsey Wys recorded six saves in the shutout.

The Seminoles advance to the College Cup for the second consecutive season with a clash against Penn State set for Friday.