Over the past two seasons, head coach Jeremy Fishbein’s New Mexico men’s soccer program has spun together a sparkling record.

The Lobos own a combined mark of 35-4-5 across the 2011 and 2012 campaigns, one of the best overall records in the nation during that stretch. 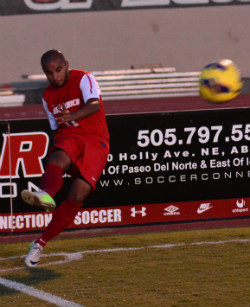 With a record of 2-0-1 through the young 2013 season, including a 1-0 overtime win last weekend against Georgetown, the Lobos are once again angling to figure prominently on a national scale. The last two seasons ended perhaps earlier than they would have liked, with NCAA tournament exits in the Sweet 16 both years.

As they try to push further this year, even after losing two big offensive pieces to the pro ranks in Devon Sandoval and Blake Smith, the Lobos are building from the back this year.

“It’s got to start defensively. We’re a team that likes to press. We’ve got a lot of new guys in the attack that have to get familiar with each other,” senior center back and captain Kyle Venter told TopDrawerSoccer.com. “But I think most importantly it starts with being a tough team and a defensive team where you’re getting shutouts, because if the other team is not scoring, it’s hard to beat you.”

Leaning on a defensive unit led by Venter, one of the best collegiate center backs in the country, isn’t a bad idea. Against a dangerous Georgetown attack last weekend, Venter and the defense were able to corral All American Steve Neumann and U20 MNT forward Brandon Allen en route to a shutout victory. Venter and his center back partner Nick Miele barely put a foot wrong, while outside backs Matthew Gibbons and Oniel Fisher shut down the flanks.

An organized defense is going to be critical going forward, as the loss of Smith and Sandoval’s combined production from 2012 (23 goals and 12 assists) is certainly significant. But plenty of firepower remains in place. Costa Rican midfielder Michael Calderon is capable of putting up both goals and assists, while pacey forward James Rogers is an explosive and dynamic player capable of special moments.

However, the loss of Sandoval is forcing the team to adapt a new tactical approach in the final third.

“We have to be very good on the ball because we don’t have that big target forward to alleviate pressure like we had last year,” head coach Jeremy Fishbein told TopDrawerSoccer.com. “But I feel we got a lot of pieces, it’s a good team and most importantly it’s a team first, that’s the mentality, the unity’s great and just a lot of pride and fight.”

Fishbein is well aware of what his team needs to accomplish on the field to maintain their lofty on field results. It was exemplified last Sunday, as redshirt freshman defender Nick Rochowski, deployed as a forward off the bench, bagged the game winner in overtime against Georgetown.

“The telling tale at the end of the season is going to be what kind of depth we have, and can guys come in and change the game,” Fishbein said. “I’m excited, just excited for the challenges ahead of us. I love this team, love the fight, spirit and confidence.”

That’s not to say the team is getting ahead of itself.

“It’s a game at a time approach,” Fishbein explained. “It really doesn’t do us good to look beyond the next game. We’re back home for the next three. We love playing at home. We’ve got a big one Friday night against Santa Clara, and we’ve always got take care of our business.”

But looking at the team’s schedule, life in a new conference is set to pose a tougher challenge. Gone are the days of the MPSF, as the Lobos joined a reconfigured Conference USA this year that should push the team to its limit.

Conference matchups in 2013 include visits from Charlotte, Kentucky, UAB and trips to South Carolina and Old Dominion to name a few. The competition is going to be stiff, though it's something Fishbein welcomes.

“Every game’s a good game,” Fishbein said. “As a coach, that’s what you want. You know you’re going to drop some games to some good teams, and you hope you win a few more than you lose."

Added Venter: “It’ll be a good challenge. Some travel like [the trip to Georgetown and VCU], but getting this road trip out of the way, I don’t think we travel further than this, so it’s a good experience, good road trip for us.”

This weekend, the Lobos continue the non-conference portion of their schedule with visits from Santa Clara on Friday and Cal State Northridge(m) on Sunday. Nine home games are left in total, and playing in front of large crowds in Albuquerque – the team averaged 2,212 fans last season – is sure to help the team continue its recent success.

“We’ve been to a lot of places – been to Akron, been to Santa Barbara, but I love our fans,” Venter said. Some of the best in the country. They’ve got those vuvuzelas now and all that stuff. It’s a lot of fun to be there. We really enjoy playing at home.”