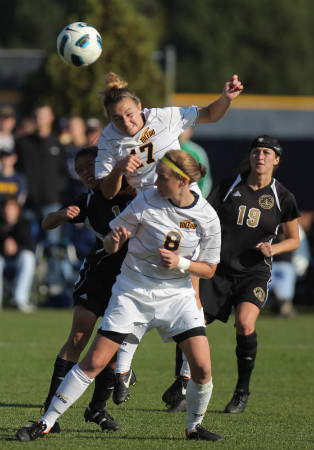 Toledo coach Brad Evans admits there will be some lineup challenges but believes his group is up to the challenge.

“I think our consistency helps us stay ahead,” he said. “We’re able to develop players and have some key people returning. I’m a little concerned about our health, but overall I’m excited about our prospects going forward.”

Neil Stafford’s Chippewas had an excellent campaign before going down in the MAC Tournament.  The team had 10 one-goal victories on the year, just one reason Stafford will be glad to see goalkeeper Stefanie Turner back between the sticks.

The Redhawks return a lot of talented players and are hoping to put it all together on the field for a bona fide title run. Head coach Bobby Kramig will welcome back leading scorers Jess Kodiak, Kay la Zakrzewski and Katy Dolesh, plus starters Kelsey Dinges, Sam Parrish and goalkeeper Allison Norenberg.

Coach Michael Thomas led the biggest improvement among  DI teams in the nation, winning 11 more games in 2011 than the team recorded in the previous season. What’s more, Buffalo returns nearly , everyone from that successful campaign.

Rob Marinaro’s Golden Flashes have something good going after winning the MAC Eastern title in 2011, but will count on some newcomers to keep the momentum going

Chris Pfau left the head coaching position in June to take over at Houston, and Vernon Croft takes over as interim head coach, just a few months after joining the program as an assistant.

Among the leading returnees for the Zips are Kelly Deniro, Maggie Rusnak, Katie Wise and Gillian Gross.

Former Notre Dame standout Nate Norman returns to his Michigan home to take the helm in Kalamazoo after Suzie Grech left in late June to join Pfau at Houston. Norman returns to WMU after a season on staff at Miami, FL.

Anna Cicerone and Brittney Pavlica are back up front for WMU, but former MAC Offensive Player of the Year Stephanie Sknowneski has departed. Other leading returnees include Lauren Fearday, Kelsey Baskins and Megan Putnam.

Angela Vultaggio’s selection as MAC Freshman of the Year was a highlight for the EMU squad. She scored six goals on the season and will be counted on for scoring punch by head coach Scott Hall and his staff.

Defender Emily Dzik and forward Bianca Rossi also made the conference all-frosh team, and will be looked upon for leadership along with midfielder Stephanie Clarke.

John Ross is the new coach in DeKalb and will guide the Huskies as they look to rebound from a difficult 2011 campaign. The team scored just 7 goals last season and allowed 34.

Stacy Strauss is head coach at Harvard on the Hocking and is looking to steer the Bobcats into the black this season.

Kellie Evans is the interim head coach, replacing Andy Richards who was let go after 12 seasons. The team will be led by Kaylee Draper, Kylie Briem, Sarah Vonderbrink and goalkeeper Becca Ison.