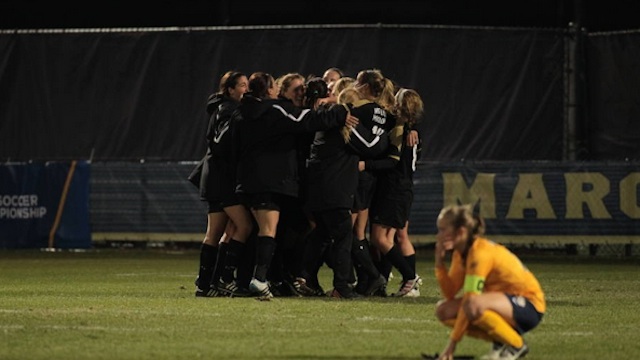 The Horizon League was spared convulsive change in the offseason. Nobody left, and the league added one in Illinois-Chicago, which embarks on its inaugural season this year. Conferences are always on the lookout for continuity, so the Horizon will be pleased all its principle players are back for another go this season. It should also be another tight race to the top.

Last season, Milwaukee managed to capture the regular season crown and then turn back third-seeded Oakland in a wild conference title game to earn the bid to the NCAA tournament, which shows how tight the league was at the top. Milwaukee also lost to No. 2 Wright State during the season, which means despite the returners, this league will probably be a close race to the finish line again.

Lewers is the biggest returner in the league after snapping up POY and OPOY honors last season following her eight goals in 17 matches. Milwaukee landed eight players on all-conference teams and only one graduates, meaning Lewers will have plenty of backup in the team’s bid for another NCAA bid. In addition to three all-freshman selections, the team also landed freshman forward Krissy Dorre on the league’s first team. The future is bright at the top.

Wright State was the only league team to beat Milwaukee last year, and its sturdy defense loses keeper of the year Brooke McCurdy, but top defender Allie Metzler returns alongside key returner Liz Soto. Oakland enjoyed a huge postseason and was nearly in the NCAA tournament, but they’ll have some big shoes to fill with the loss of first-teamers Abbie Haelewyn and Meghan Reynolds. Sophomores Alice Palmer and Rachel DeLuca will likely step into increased roles.

Detroit (Alyssa Riley), Cleveland State (Vickie Havas) and Green Bay (Hannah Kernen) have conference first-teamers returning as they attempt assaults at the league’s hegemony. If Detroit in particular can keep its back solidified as it did for much of last year - senior defender Alyssa Lotito was key in that regard - they can stay in the top spots. UIC is an interesting case considering its incoming class will be its first. Little will be expected of the Flames, but that can sometimes lead to results.

Given its size, the MAC is typically good for a blender of a season, and that held true last year. Neither divisional winner ended up in the tournament championship game, as Western Michigan topped Ball State 1-0 on a tally from Ali Russo to earn a spot in the NCAA tournament. Incredibly, the Broncos weathered a barrage against Marquette in the dance to win a shock 1-0 win in the first round.

That stole some thunder from rival Eastern Michigan’s regular season conference crown, and the Eagles will assuredly be gunning for revenge this year. Conference player of the year Angela Vultaggio is back up top for her senior season after hitting 12 goals and seven assists last year, and co-defensive player of the year Emily Dzik is also back to anchor the squad. There are a few key losses here, but EMU will expect to right their wrong from last season.

Western Michigan brings back a host of talent, including Kyle Nylen, Rachel Chaney and NCAA tourney hero Aubrey Sudomier. Kent State loses a couple key players, but the Golden Flashes landed a league-high three players on the all-freshman team last year and will likely need them to stay near the top in the East. That includes freshman of the year and aptly named Jenna Hellstrom. Despite winning the East, Miami couldn’t claw past Ball State in penalties in the conference semis, and losing seniors Katy Dolesh and Kayla Zakrzewski will hurt, though Kelsey Dinges and Courtney Zanotti are coming right up behind.

Despite the Michigan logjam at the top of the West last year, Ball State still managed to navigate itself to the precipice of the NCAA tourney after a fourth-place divisional finish. That’ll be tough to replicate, but teams can do worse than looking to standouts like Madison Oyer for guidance. Plus, the run to the title game will only strengthen their core for another one.